But first, a quick story:

In 2015, an oil and gas company called Southland Royalty was formed with financing provided by a large energy-focused private equity firm and a handful of other investors, including the company’s management team.  The private equity firm was the largest investor, with a $775 million investment in the company and an ownership stake of ~80%.  Things were always a bit rocky for Southland and its owners as commodity prices struggled pretty much from the word “go”.  Along the way, Southland took on debt in the form of a $540 million line of credit in order to keep things moving along in what is a highly capital-intensive business.

Early in 2019, the banks that had provided the debt financing to Southland took a fresh look at the company’s assets and decided to pull back on any additional financing. In fact, they cut back their combined commitment to the aforementioned line of credit by $140 million. With no ability to raise additional capital, the company faced a cash crunch from which they wouldn’t recover. As a result, Southland filed for bankruptcy protection earlier this week, effectively wiping out the equity in the company and any dream of a turnaround.

There is really nothing special about the above story in that it happens all the time in corporate America: a company runs into trouble, they use the bankruptcy system to work it out, and a bunch of people lose a lot of money.  What is a little special about the above story, however, is how quickly things went from bad to completely unsalvageable. If you believe Southland’s private equity owner's accounting, the whole business fell apart in under 90 days…83 days to be exact.

Skeptical yet?  You're about to be...

I’ve written about this before but one of the issues with private investments is that they can be hard to value. The valuations rely on a combination of a bunch of different factors, which may include company assumptions/projections and public market comparisons. At the end of the day, far too many people take these valuations as the gospel and use them to calculate returns and make assumptions of their own. The issue with taking the valuations of privately traded assets at face value is really threefold:

2.  They can mask underlying issues with the assets you’ve invested in.

3.  They can lull you into believing that the risk-adjusted returns from private assets are better and less correlated to public markets than they actually are.

So let’s knock these out one by one…

They can be wildly inflated

Valuations of private assets are in the eye of the beholder. When it comes to private equity, however, the beholder generally has a vested interest in making these valuations as high as possible. Why? Well, let’s see…

Do they get paid better based on higher valuations?  Check.

Are you catching my drift here?  (hopefully) Check.

Yes, I know that there are auditors involved and yes, I know that they can’t completely pull the valuations out of thin air but if you don’t think that games are played with these numbers on a regular basis, then you are sorely mistaken. There is an entire cottage industry devoted to funny accounting metrics that make you think the returns are better than they actually are. From changing discount rates to counting the effect that cash would have had on returns had all of the fund’s capital been called, I’ve seen pretty much every trick in the book pulled just to make you think the volatility isn’t there. Trust me on this…it is.

They can mask issues at the underlying asset level

As you’ve read from me before, one of the great things about publicly traded assets is that they are public. On any given day, you can access a treasure trove of information not only about public companies but also about how the market views their assets; there are SEC filings, analyst reports, and trading data, all of which give you a sneak peek into the how the underlying business is doing.

Worried about a liquidity crunch? Take a look at how the company’s bonds are trading.

Concerned that company insiders don’t have enough skin in the game? Take a look at SEC Form 4, showing who is buying and selling from the inside.

Very little of the above can be accomplished with private assets, particularly relatively smaller ones.

They can lull you into believing that the risk-adjusted returns from private assets are better and less correlated to public markets than they actually are.

There is something known as a “smoothing effect” that takes place in private assets when one examines their returns. The smoothing effect refers to the fact that privately traded assets (like private equity funds) appraise their assets less frequently and often with a lag to market movements. As a result, their returns appear to fluctuate less sharply than and with lower correlation to more liquid investments (like public equities).

If you owned Netflix stock over the course of the past three years, you would have enjoyed quite the rollercoaster ride higher. As the business grew, so did the stock price, but it was anything but a straight line. The blue line below in the chart below is that line.

Now, let’s let our imagine run wild and say you ran a private equity firm and that Netflix was a private business that only needed to be valued quarterly based on your best guess of what it was worth. Let’s also say that your best guess lined up perfectly with what the actual public equity price was over the past three years, but you lagged reporting the price by a quarter while you did your valuation work (e.g. the “private price” on any given day is equivalent to what the public price was 3 months earlier). That would have been a smoother and far less correlated line. The red line below is that line. 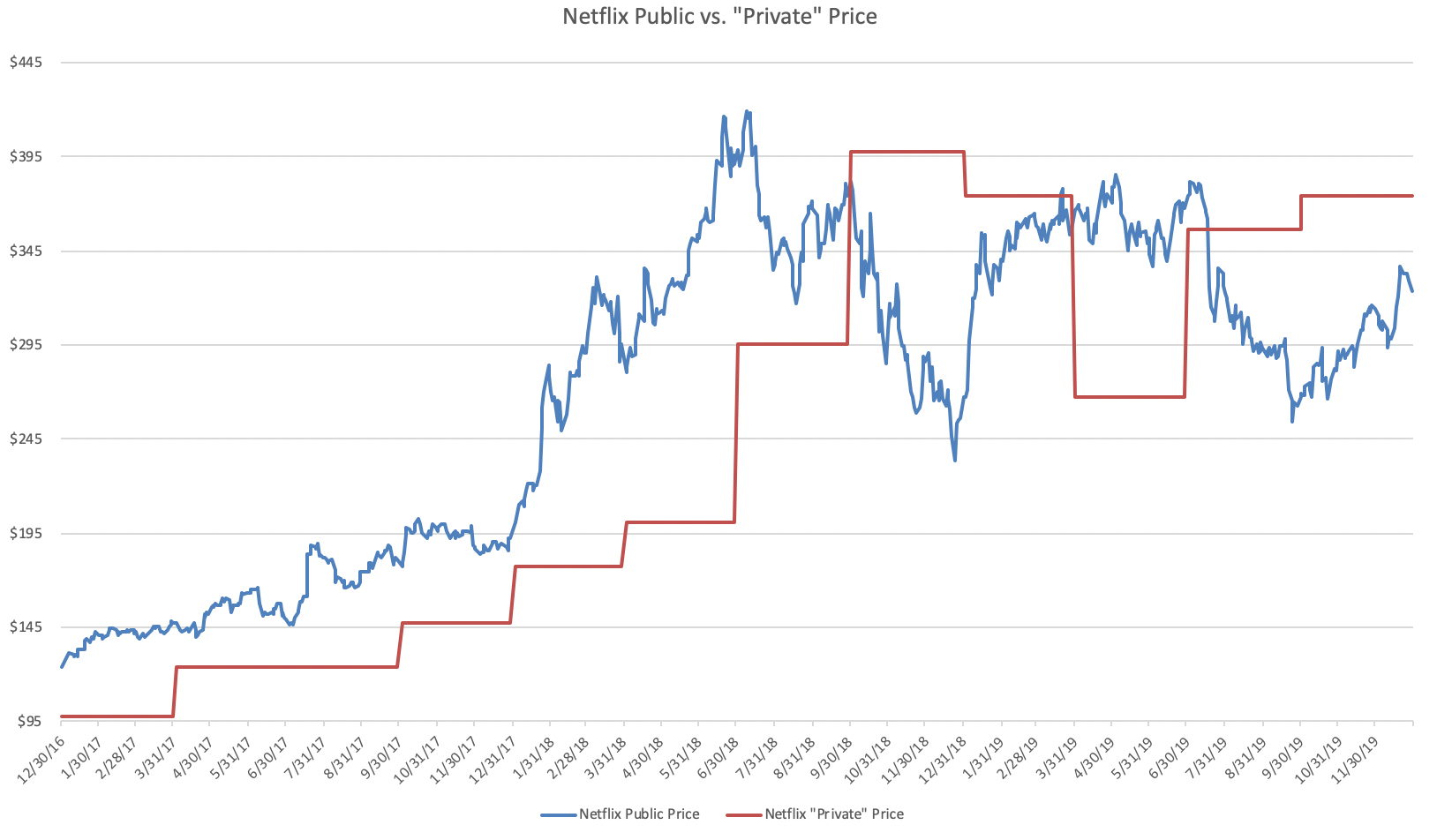 OK back to our original story…

Just like my above example, every so often, Southland's private equity owners obviously had to report back to their own investors about how their underlying assets (like Southland Royalty) were doing. According to sources quoted in The Journal, towards the end of 2018, the business really started to hit the skids and the banks came back with the aforementioned bad news that they were cutting back their lines of credit. For a capital intensive business like drilling, that was basically a death knell. So, they did what any prudent manager would do…they cut back their valuation on the business by 25%...to what they had originally paid for it.

Yes, even as their capital was drying up and their core business was failing, they still showed the investment as breakeven!

According to the article, their investment in the company as of the end of September was valued at $773.7 million, almost identical to the $775 million that they had originally put in.

So what can this "sudden drop" in Southland's business and the resulting bankruptcy teach us about the volatility in private assets?

It’s always there, you just can’t see it.