Larry Robinson is one of the most legendary hockey players to ever lace up a pair of skates.  There’s a pretty good chance you’re not familiar with him though and that’s because Robinson achieved his greatness while producing somewhat pedestrian results in the areas that get the most attention.  He ranks 442nd on the all-time goals scored list, 100th on the all-time points list and 44th on the all-time assists list.  Impressive?  I guess.  Legendary?  Not really.  Those rankings place him well below household names like Wayne Gretzky, Gordie Howe, or Mario Lemieux in all three areas.  But Larry Robinson is a legend.  Don’t believe me?  He’s in the NHL Hall of Fame.  He was voted one of the 100 Greatest NHL Players.  He won six Stanley Cups as a player and then four more as a coach and scout.

And you probably haven’t heard of him. That’s because Larry Robinson played a position where the notoriety was so rarely focused. His job throughout his career was to help protect his goalie, break up breakaways, and set up plays to put the more notable names on his team in position to score. He played twenty seasons in the NHL, at one point winning four straight Stanley Cups in the 1970’s.  A remarkable career spent doing unremarkable things.

Larry Robinson’s success would be hard to quantify if hockey didn’t have a statistic built just for players like him: the plus-minus average. Plus-minus is a statistic used to measure a player’s impact on the game, represented by the difference between their team's total scoring versus their opponent's when the player is in the game. For example, if Robinson played an entire game without a break and his team won 3-2, his plus-minus average would be +1. The statistic is meant to capture the little things that may go unnoticed… clearing the puck out of a dangerous situation, a body check that set up a great pass, or a skating to where the puck wasn’t in order to draw another player offsides.

Robinson stands a full 133 points ahead of second place. Just to give you some perspective, 133 points from second place gets you all the way to tenth place. To top it off, he had a twenty year career in which he never had a single year where his plus-minus was negative.

Accolades not only recognize your efforts but also reinforce the importance of what you’re doing; a lack of these could lead even the most steadfast among us to believe our work is futile.

Investing is a game of dedication and patience.  The accolades that come along the way are monetary in nature in, thus, easily measurable.  One area in which there have been zero accolades given in recent years has been value investing.  I wrote a little bit about value back in November and used some fairly simple logic to debunk some of the more common narratives around why value investing hasn’t worked in a really long time.  Cliff Asness, founder of AQR and one of my personal investing heroes, wrote a really long but fascinating post last week that dove into this phenomenon in a much more detailed and nuanced way.  It’s really great but it’s also really long and so my guess is most of you won’t read it.  Here’s the upshot: lately, investors have become even more willing than normal to pay up for stocks they like than stocks they don’t like.  That means value has suffered even more than we thought it would.

As is common for him, Asness unpacks this in like 19 different ways and ultimately comes to the same conclusion that so many of us have… this time isn’t different.

But it’s hard to imagine that this time isn’t different given that the lack of accolades for value have persisted for so long (that whole “dedication/patience” thing we talked about earlier). The recent market activity has been described as a “winner take all” environment, as the tech names that we’ve all become sick of hearing acronyms created for have ruled the day. Whether you call it FANG or FAMANG, you can’t deny the fact that Amazon basically rules the world now and has a $1 trillion+ valuation to show for it. More products and services will continue to go online as a result of the pandemic and so it makes sense intuitively to invest in that trend and keep buying growth.

But value is still insanely cheap.

Borrowing from Asness's post, here is where we are in terms of the value spread, in layman's terms a ratio that measures the difference between the expensive stocks and the cheap stocks: 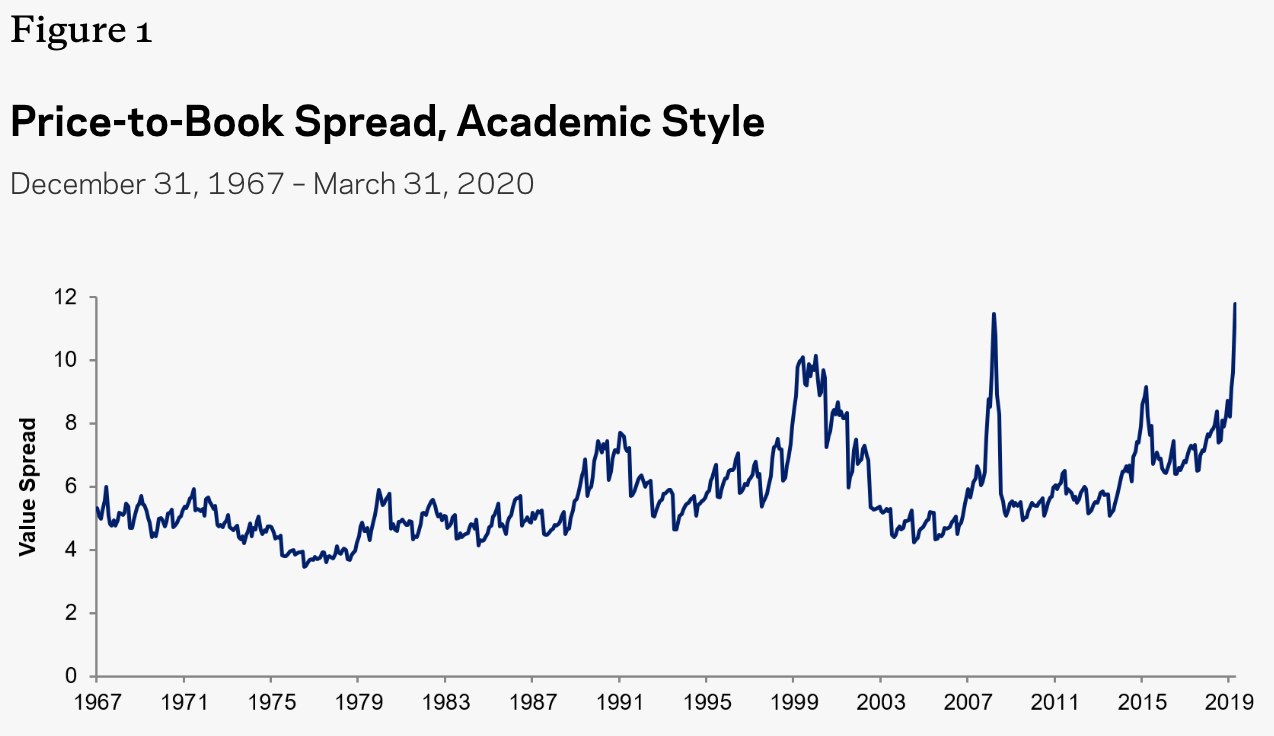 (The higher the line goes, the cheaper value stocks are.  As you can see, based on this most simple metric, we are past the insane relative valuations for growth stocks that we saw even during the Tech Bubble of the early 2000's)

You’ll undoubtedly continue to hear calls around why this time is different: changing accounting standards, everything in our lives going online, and the fact that computers can implement systematic investment strategies like value better than human beings can.  But the one thing that won’t change, no matter how many packages Amazon delivers or how many subscriptions Netflix sells, is human behavior.  It feels good to watch stock prices go higher and it feels miserable to watch them go lower and so we buy the stuff going up and forget about the ones going down.

But continually buying the high flyers and selling the losers means abdicating some level of discipline around price. That means that you keep buying them on the way up no matter the valuation… even if Amazon trades at 80 times earnings, it doesn’t mean that it can’t trade at 90 times earnings and higher the valuation moves. But it also means you keep selling the losers on the way down… and that’s what actually creates the opportunity for value. Eventually, and we have absolutely no idea when, things move too hard in the wrong direction and the snap back occurs. Sometimes it takes a year and sometimes it takes a decade (or longer!) but if history has taught us anything, it’s that the remarkable part is being able to perform the unremarkable action of waiting.

Oak Park Unified School District held its retirement ceremony on Tuesday night.  Like so many other school districts across the country, this year’s wave of retirements and graduations will be remembered not for the ceremonies that celebrated them but, rather, the ones that never happened.  They decided celebrate anyway with a virtual ceremony and I watched from home, observing colleagues congratulating each other on long tenures in education with the occasional technical difficulty.

I don’t normally spend my Tuesday nights watching virtual farewells but this year was different. Dr. Leslie Heilbron retired last night. She’s the Assistant Superintendent of the district. She is also my mother.

My mom’s career in public education spanned 45 years with 32 years of service (she took a 13 year hiatus in the middle to raise me and my sister). She spent most of those years working diligently at a job that she loved, always willing to give a little extra time to her students and staff. She started out as an elementary school teacher, eventually settling in to teach first grade. Afterwards, she went on to be a principal of an elementary school and, finally, assistant superintendent of the district. Along the way, she collected two Master’s degrees and a PhD. She raised the aforementioned two kids and four grandchildren, too.

But if you look back on her career, there was no real defining moment or crescendo. No student went on to be President of the United States and no former student celebrated her impact on him while receiving an Oscar. Just a bunch of normal kids who passed through her classroom and went on to do normal things. The cynics among us would say that, like Larry Robinson, she spent a remarkable amount of time doing unremarkable things.

But calling those things unremarkable would be forgetting the immigrants with a special needs son for whom she acted as an advocate for years until he finally got the services he deserved. It would gloss over all of the food insecure children for whom she was always willing to spare a few extra dollars so they could have hot lunch. It would neglect all of the mothers to whom she gave our clothes because they couldn’t afford to buy new ones for their kids. It would fail to recall the lengths she went to in order to help a student who was homeless and living in her mother’s car. Mostly though, it would overlook all of the seemingly ordinary things that she did for people in order to make them feel extraordinary.

So congrats on a great career, Mom.