The above tweet from my favorite writer Morgan Housel pretty much sums up what you’re about to read. Buying stocks is hard. Shorting stocks is even harder. Tesla has been in the middle of a multi-month short squeeze that has rocketed the stock higher. This can only be described as either epic or painful depending on which side of the trade you are on.

Here’s a brief refresher on how we got here with Tesla in case you’ve been asleep at the wheel (you see what I did there?!?!?!) while this story unfolded:

Tesla is an amazing company that makes really cool cars.  That’s why consumers love them.

Tesla also happens to lose a bunch of money on those really cool cars and basically has no plan to stop doing that.  That’s why short sellers hate them.

As if that wasn't enough for a great story, Tesla also has a founder and CEO named Elon Musk who is equal parts creative, brilliant, and insane.  As Kanye West once stated, “ You know, if you guys want these crazy ideas and these crazy stages, this crazy music and this crazy way of thinking, there's a chance it might come from a crazy person.”  Elon Musk definitely qualifies as a crazy person.

You’re now up to date.

Anyway…where was I? Oh yea, the shorting thing. OK, so shorting a stock is really difficult for a lot of reasons but one of them is because shorting isn’t zero bound. What I mean by that is that if you buy a stock today, your risk is that the stock goes to zero and you lose your investment (i.e. the price at which it trades can’t go below zero). Pretty simple. Shorting, on the other hand, isn’t so simple. If you sell the stock at today’s price, there’s no guarantee what could happen next since there is no conceivable price at which a stock could stop going up. It could basically just continue going higher forever…which is basically what has happened for the last five months with Tesla. Here’s a visual of what that has looked like: 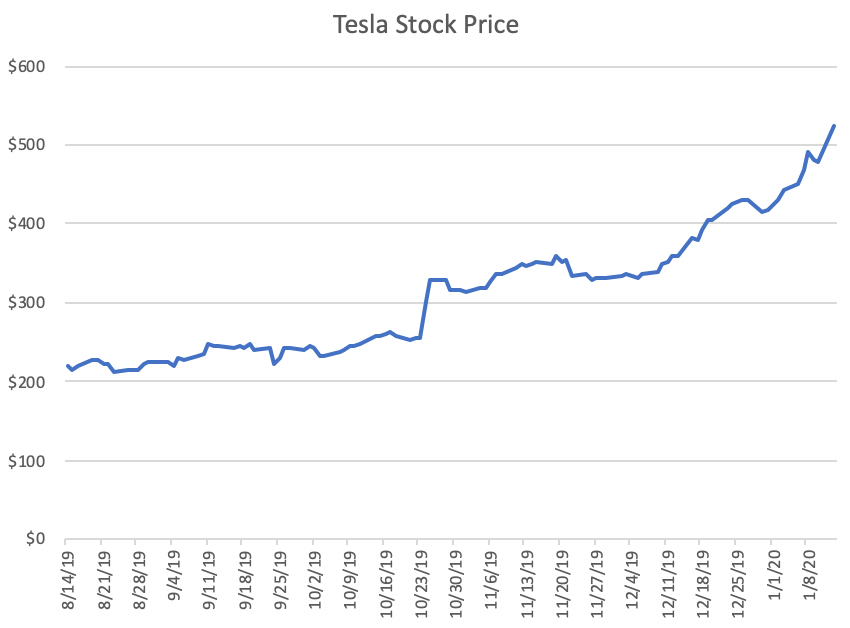 So here’s the math on a 100 share short position in Tesla over these past five months:

Fast forward 5 months and it’s now January 14th and the stock is trading at $530/share. Your short position is now worth ($53,000). The resulting $31,000 difference is your loss plus you would have had to post an additional ~$15,000 in collateral (those are what are called margin calls and, trust me on this one, they aren't fun phone calls to make or receive).  And that doesn't include your borrowing costs.  That means you’re down somewhere around 300% on your initial collateral position...and it’s been 5 months.

Now, along the way, not a whole lot has changed: Tesla has continued to produce cool products that lose a lot of money and Musk has continued to say and do crazy things. Yes, Tesla surprised everyone by turning a small profit in the third quarter but it was a pretty low quality quarter from an accounting perspective and didn't even put a dent in the destruction of shareholder value that we've seen over the past five years as their problems compounded.  Those problems have included:Huge losses, constant capital raising, and a CEO comitting securities fraud...on paper, this company has been a short sellers dream come true!  So why have the shorts lost so much money?  Here’s what you’re missing:

"Animal spirits" is the term that John Maynard Keynes used to describe the instincts and emotions that influence human behavior or as he put it, “a spontaneous urge to action rather than inaction, and not as the outcome of a weighted average of quantitative benefits multiplied by quantitative probabilities.” (I like my definition better). It perfectly explains the short squeeze in Tesla's stock.

Animal spirits is fear, greed, lust, trust, and everything in between. It’s the tech bubble, the mortgage crisis, and the Great Depression all explained by one thing. It’s the little voice inside a trader's head telling him to buy Tesla and move the share price higher even though he knows it doesn’t necessarily make sense and people are probably just buying to squeeze out the shorts.

Yes, it's the animal spirits and it perfectly captures what we’ve seen happen with Tesla these last five months.  On Monday alone, short sellers cumulatively lost over $1.2 billion when the stock popped by 10%. This is raw human behavior at its finest. Things go up until people don’t think they can go up anymore…and then they really go up…only forcing worse decision making. The same happens on the way down until, eventually, the rational part kicks in, the animal spirits go into hibernation for a while, and life returns to normal. Along the way, though, a lot of really smart people both make and lose a lot of money.

So the next time you see that perfect investment idea come along…the one that can’t miss and that makes too much sense to everyone that looks at it, remember…animal spirits are waiting.

It's a jungle out there guys, so good luck and let me know if we can help along the way!