Getting punched in the face really hurts.

Getting punched in the face by a professional boxer could leave you with some serious lasting damages.

Getting punched in the face by Mike Tyson? Hoo boy… now, that’s a whole different ball of wax. 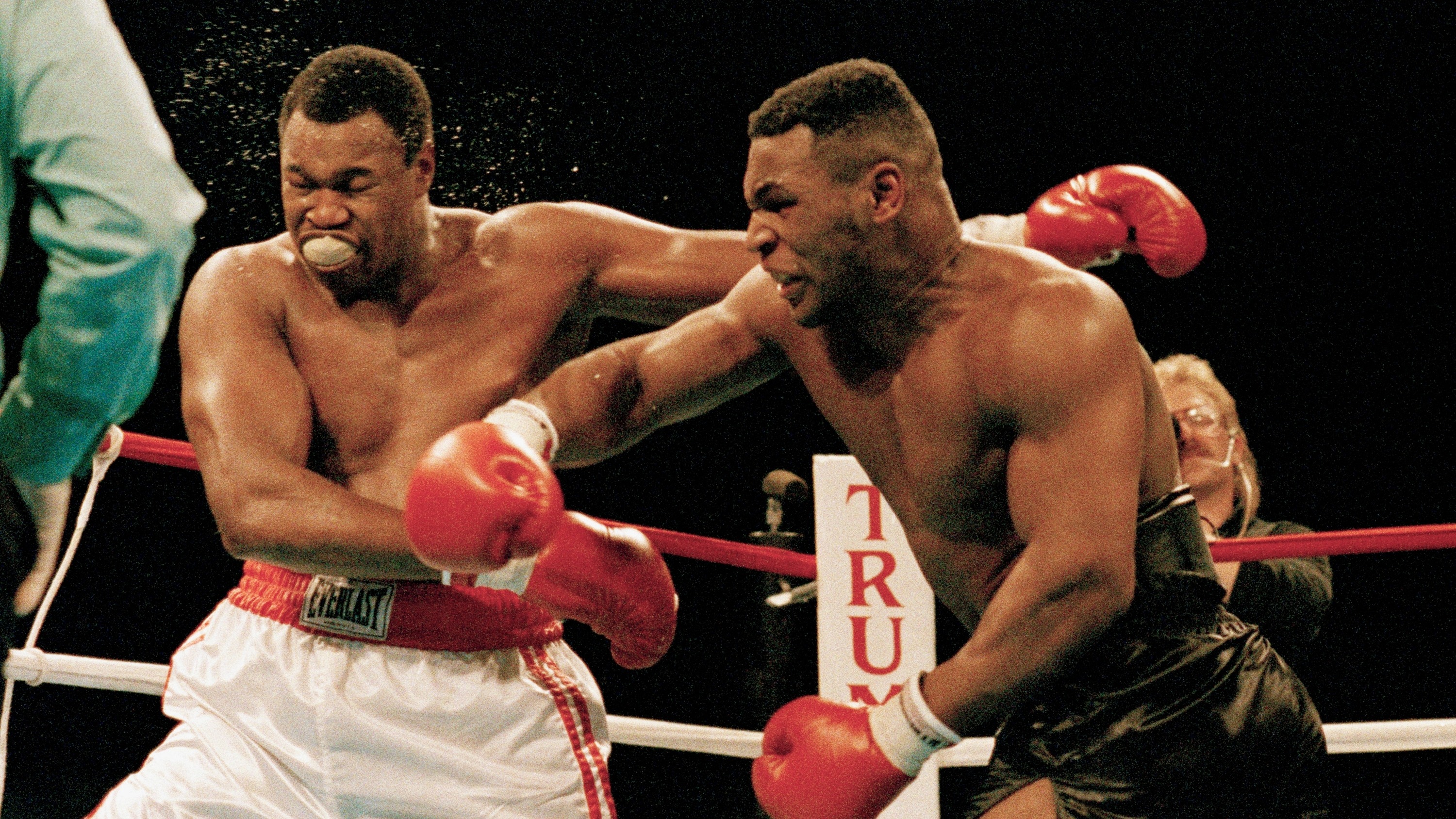 Over the course of his career, Tyson punched a lot of people in the face. “Iron Mike”, as he was so aptly named, won 50 professional fights, 44 of them by knockout.

He was really good at punching other people in the face.

Take Marvis Frazier for example. The son of former heavyweight champ Joe Frazier, Marvis was coming off of a decorated amateur career when he squared off against Tyson in the fateful summer of 1986 (it was fateful because the Mets were in the midst of their improbable World Series run, but I digress…).

Coming into their bout, Tyson was 24-0 and well on his way to becoming the next great heavyweight champ.

30 seconds into their meeting, it was over.

“Tyson was just another guy who was going to be a statistic. Yeah, that's what I thought. I threw a jab and that's all I remember."

A jab and that’s all he remembered.

That’s because right after throwing that jab, Tyson leaned in with his famous uppercut to left hook combination and knocked Frazier unconscious before he even hit the canvas. Boxing is a brutal sport and that night was particularly so for Frazier.

Iron Mike would continue to roll through opponents, eventually winning his first title fight later that year when he flattened Trevor Berbick to become the youngest heavyweight champion in history.

Tyson was fast, ferocious, and light on his feet. But Tyson had something that most people didn’t realize at the time: an innate ability to get his opponents away from their fight plan.

You see, good fighters spend a lot of time studying their opponents before they step into the ring with them. They watch videos of previous bouts, learn about their training regimens, and hire sparring partners that fight like them. All of this is done so the fighter can get a vision in his head of what the fight might look like: how their opponent dances on his feet, how his punches land, and what his vulnerabilities might be.

If you were going to step into the ring with Tyson, you’d better have a good plan. But Mike Tyson never made much of plans. When asked how Evander Holyfield’s plan to neutralize him might hold up the first time they met, Tyson famously stated:

“Everyone has a plan until they get punched in the mouth”

It seems like a lifetime has gone by since this past March, but it was only 9 months ago.  I went back and looked through some of the stuff I was reading and writing at that time and basically all of it was negative.  We were all hyper focused on the virus and what might happen next.  It seemed like the world was coming to an end (quick side note: it almost did) and no one wanted anything to do with risk since it was apparent that the virus would get worse before it got better.

Could the economy survive??

At the time, I was worried about what the path of the virus might do to confidence in the broader economic environment and, in turn, consumer spending (which is the lifeblood of the economy). It was pretty clear to me that if the numbers continued to get worse or there was a second wave then we were in for a bumpy road.

To wit, I wrote the following in a blog post titled "Under Pressure" on March 18th (a mere 5 days before the market bottomed):

We’re seeing a partial shutdown of the global economy. People are being mandated at this point to not go out and spend money. Mandated! That’s really scary and we have no way of knowing what the second and third order effects of that will be -- but we know they won’t be good. Businesses are closing their doors but we’re not sure for how long. There is no way to model the revenue loss if you don’t know how long the revenue is going away for… or if it’s ever coming back.

That statement is almost laughable now since the second and third order effects of people being mandated not to spend money couldn’t have been better or more bullish for the markets.

As a result of the shutdown, the Federal Reserve and Treasury combined to put together the biggest rescue package the country has ever seen (and they’re still not done yet!). The people most affected by the pandemic were given stimulus ranging from enhanced unemployment benefits to direct checks. Companies were given forgivable loans to keep their doors open. Municipalities were offered a lifeline to keep them afloat through the crisis.

All of that buoyed the markets and provided a U-turn the likes of which we haven’t seen in over 30 years (the last time anything was even close was post-Black Monday in 1987) .

Even value stocks turned around (I mean, not totally but let’s not get carried away here!).

And it all happened while most of us were sitting around thinking about the huge, unknowable risks.

But, as I’ve written about many times before, risk is the idea that more can happen than will happen. Most of us just didn’t think this could happen: 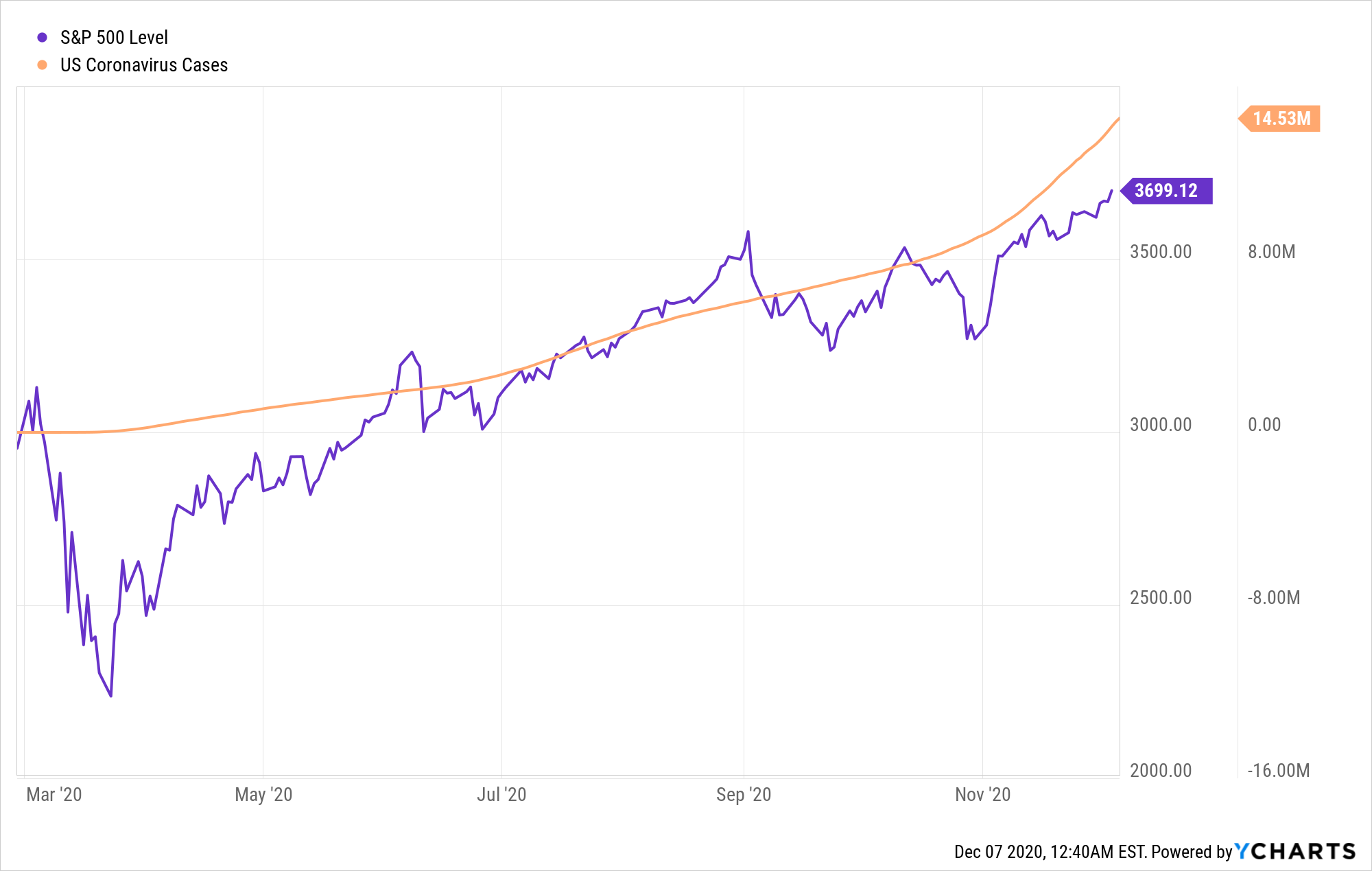 (note: in case you can't read it, the orange line represents total number of Covid cases in the US and the purple line is the S&P 500... yes, they both went up together... yes, that's kind of crazy.)

Apparently, risk works in both directions and markets melt up sometimes just as easily as they melt down.

All of this is to say that it was really tough to know what to do during that time. I urged my clients to utilize caution and most took a fairly measured approach. I didn’t advocate selling “the Covid crash” but I certainly didn’t advocate buying it either. With the benefit of hindsight, I probably should have been a little more aggressive in buying but there were so many unknowns which just seem like common sense now.

The government came to the rescue.

The world continued to spin.

But we had no way of knowing that any of that would be the case. In fact, I would argue we came a lot closer to the financial world crashing down around us than what most people realize. This Wall Street Journal article did a pretty good job of outlining just how close we came.

We were all also really stressed at that time (I mean… aren’t we all still??) and stress leads to really poor decision making. How could we have guarded against this stress causing us to make bad decisions?

We could have planned in advance.

When Evander Holyfield and Mike Tyson met for their first match, Holyfield was a big underdog.  Shortly before the fight started, a newly revitalized Tyson was given the strong advantage from the bookmakers in the lead up to the fight.  Vegas placed Holyfield’s odds of winning at no better than 8/1.

That would turn out to be the last time Tyson would have an advantage over Holyfield that night.

When they entered the ring, Tyson charged out of his corner and immediately hit Holyfield with a strong right cross. Holyfield didn’t flinch.

Then he began meticulously working his plan.

Holyfield had studied Tyson’s style extensively in the lead up to the fight. He knew that Tyson always dipped down and to his left when he was ready to unload his aforementioned famous left hook. Every time Tyson dipped, Holyfield would immediately jab at him, not allowing him to get his most deadly punch across. He would then move in, clinch Tyson, and push him backwards. Holyfield knew that he was stronger than Tyson and if he could keep pushing him around the ring, Tyson would get frustrated and eventually get sloppy.

By the eleventh round, referee Mitch Halpern had seen enough and called the fight in Holyfield’s favor. A stunned Tyson could do little more than retreat to his corner, wondering how the man that he repeatedly punched in the face was able to keep his plan together.

Being an investor is really tough and this year has exposed that in all of us.  The up and down whipsaw that markets have offered us has been unprecedented in speed but not in size nor scope.

This is what markets do from time to time. They go totally haywire until eventually they find their equilibrium and life goes on. But since markets don’t change much in that regard, you have to make sure that your core approach doesn’t either.

And that’s where having a plan comes in.

Financial plans can come in all shapes and sizes, but the great ones have a few things in common with great fighters:

1. They anticipate chaos – Great boxers know they’re going to get hit from time to time and your plan should too.

Stress test your returns assumptions so that when markets start to sell off, you are reminded that the stock market going lower for periods of time is a feature rather than a bug of how this whole thing works.

2. They account for cash – Far too many boxers have run out of cash during their careers and had to fight too long as a result. Don’t be like them… make sure you always have cash on hand.

As I wrote in last year’s end of year piece, you always want to make sure you have enough cash available to fund your spending and weather a protracted market downturn.  That can mean different things to different people but don’t forget that the only thing that is cash is… cash!  Short duration munis or corporate bonds are wonderful but can get stressed just like anything else in a bad environment (go back and read this again if you don’t believe me).

3. They help guard against bad decisions – An experienced fighter knows he must be patient to win a bout. No one can reliably go for a knockout punch on every swing. They plot their attack and stay patient even if it doesn’t work out as they planned. Sound familiar?

By going through the process of actually writing down your goals for your plan, you’re setting a reminder to your future self of what’s actually important. During times of stress, those written reminders will come in handy and remind you of why you invest the way you do.

Markets will punch you in the face from time to time… I don’t care if it’s stocks, bonds, real estate, or anything else. That’s just the way the world works.

Great investors eventually come to the realization that they can't control markets at all but they can control their own behaviors... that's really the only edge left in this game.

So the next time you’re getting ready to stick and move, ask yourself:

‘Do I want history to remember me as Marvis Frazier or Evander Holyfield?’

And then… give me a call and let me help you get a shot at the title.