We entered 2020 with optimism abound – markets at all-time highs, unemployment at all-time lows, and economic growth chugging along.  A mere three months later, we closed the first quarter of 2020 with the worst returns since 2008 and an economy on the brink of collapse.

To quote the great Ferris Bueller… 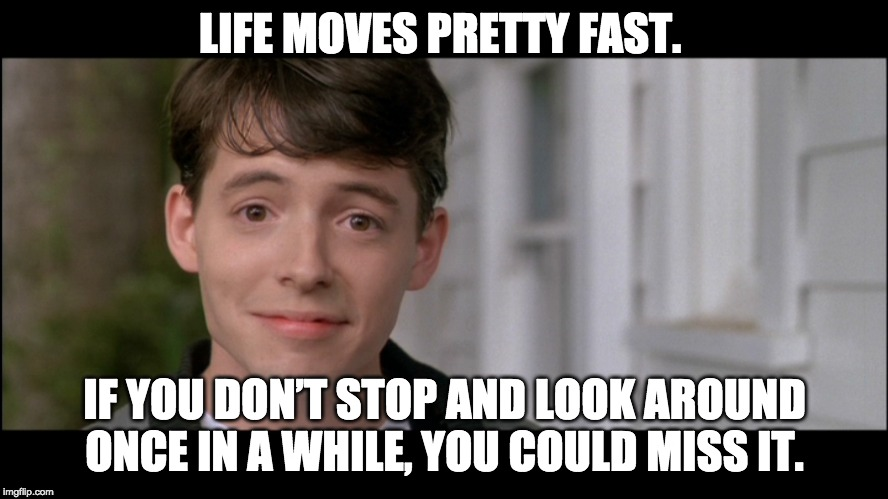 So, what happened? Well…coronavirus happened. I don’t think I really need to recount that since:

A. You’re probably reading this while at home rather than work
B. You can’t really go anywhere
C. I’m not sure I can add much beyond what you already know

So I think I’ll spend what little part of your attention I’ve grabbed to give you a sense of where I think we are and a good idea to get started on this next part of the cycle.


I’ve been getting the question “when do we start buying?” a lot lately. I think it’s partly because we haven’t seen a protracted market pullback in a long time, partly because markets tend to go up over time, and partly because this most recent move down has been so swift and vicious. So, before I get into answering that question, here is a general sense of where I think we are from a market/economic perspective:

Feeling confident enough to start buying something yet?  Good…this is the time to start…but maybe not the way you had anticipated.


An incredibly insightful friend of mine said something really interesting to me last week. I called him to catch up and he sounded very upbeat (I consider him a big brother to me and I love him as such but he isn’t exactly the blue bird of happiness most days). I asked him why this was the case given the 24/7 negative news flow. His response was simple, “I guess when things are good, I tend to get depressed because I know they’ll get worse. But then when things are really bad, I’m happy because I know they’re likely to get better.”

That’s the exact attitude we all need to be able to invest in anything at all right now.

This will get better…eventually.  As I’ve said numerous times recently, the end of the world only comes once and I’m pretty sure this isn’t it.  But, I’m also totally cognizant of the fact that the effects of this will be felt for a way longer time than anyone originally anticipated. I think the the best comparison for this current situation is 9/11. Life never really went back to “normal” after 9/11 in the sense that it forever changed the way we travel. I think this has the ability to be that impactful – it will change the way that people congregate, travel, and work. Some of those things will be good…it will probably make us safer and less prone to another exogenous shock like the one we’re currently experiencing. Some of them will be really bad though…if fewer people are getting together and doing things, it likely means certain industries will suffer as a result. Based on their current stock prices, you can reasonably assume that a lot of restaurants and retailers will be included in that group.


So where should we start to dip our toe again into risk?

Well, one area that has come under extreme stress lately is the high yield bond market. High yield bonds are ones that are backed by less creditworthy borrowers and thus considered much riskier than their high quality, investment grade counterparts. I think of high yield bonds as almost an equity substitute; they can have equity-like volatility but can also offer equity-like returns. They’re generally a pretty decent proxy for how the investment community feels about risk because in a bad economic downturn, many of these companies will be the first ones on the ropes. When evaluating investments in high yield, you need to look to the probability of default, the likelihood of financial recovery in the event of default, and the compensation being paid to you in the form of interest while you wait around to see if they will default. The last of those three tools is what most investors look to in order to gauge the attractiveness of the market as a whole – this is referred to as the high yield spread. In other words, how much am I being paid above the level offered in a safe investment in order to hold these bonds? The equation can be though of simply as:

Given the current spread of a little more than 9%, I think right now is a reasonable time to start dipping your toe in the high yield waters. 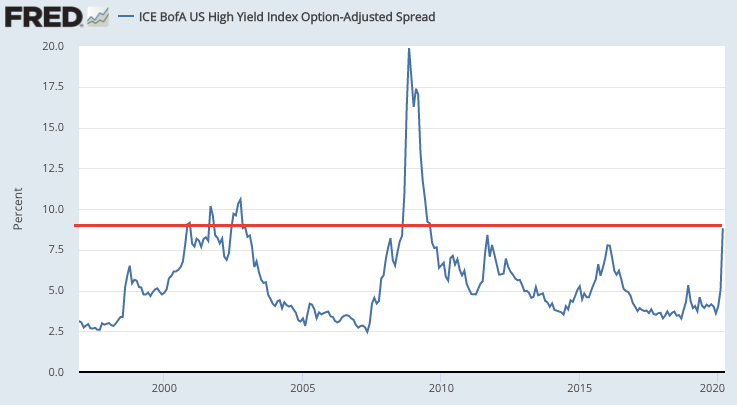 So, high yield bonds currently offer a spread in excess of 9% against their high quality counterparts. From a historical standpoint, that’s an incredibly attractive entry point even given what I think will be a much higher than normal default rate.  Even if I stress test the asset class for an unprecedented level of default and an even lower level of recovery, it doesn’t lead me to the conclusion that there is a whole lot of downside left from current levels…it certainly appears to be less downside than what we could see in equities. Hence, this seems to be a reasonable place to start working our way towards risk.

When you look at the chart, you’ll notice the financial crisis of 2008 as the obvious the outlier. That said, I don’t think the analogues to 2008 are necessarily good ones right now. That was truly a credit crisis and high yield acted as it should have…we witnessed the 10,000 year flood in credit and high yield bonds sold off as a result. Today’s situation is more of an economic crisis and so I don’t think the reaction in credit will be quite as dramatic but it has been and will likely continue to be bad (the equivalent chart to run today would be one covering unemployment which would mirror what we saw in credit in 2008).

So why invest in high yield now? Well, if you’re going to dip your toe into some risk anyway, I think this is a reasonable place to start. To be clear, these investments aren’t necessarily for the faint of heart - they are risky assets just like stocks. They’re different from stocks though in the sense that they are contractual loan obligations and thus, are a little easier to do valuation work on (they don’t require the discounting and growth assumptions that equity valuation work does). That valuation work leads me to believe they are more fairly valued than many other parts of the markets at this moment in time.

To summarize this work, you could see default rates of around 20% (that's never happened) and recovery rates below 40% (that's happened but it's not very common) and you would likely still not lose money over a two to three year time horizon.  That's about as good as of an opportunity as you're going to see in the current environment.


I think the question that most of us should be asking right now isn’t so much “how bad will this get?” but really more “how much longer before this gets better?”. We all know the next few months are going to be really, really bad. Bad for the economy, bad for our lifestyles, and bad for the health of the country. But I do think all of those things will get better with time.

With the benefit of time, we will probably see the curve flatten and maybe even a vaccine developed.

With the benefit of time, we will see markets sell off a little further and then recover.

With the benefit of time, we will see our lives return to whatever “normal” will now mean.