Nate Silver is getting roasted on social media this week for a tweet his research firm sent out towards the end of last weekend’s Super Bowl between the Kansas City Chiefs and the San Francisco 49ers.  Here it is in all its glory: 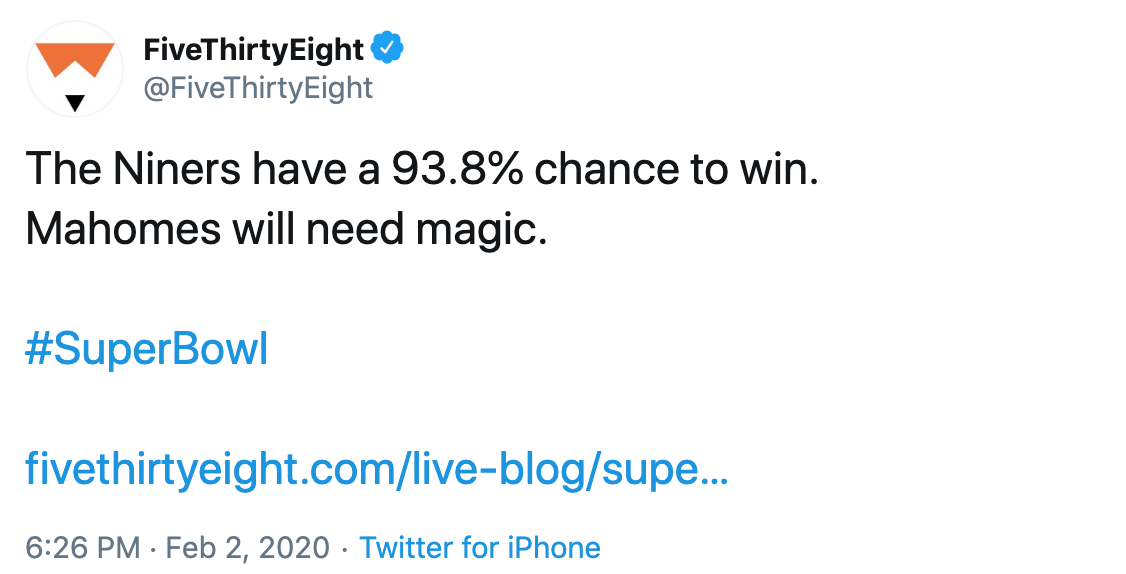 We’ll come back to this in a minute but you might recall Silver as the one who assigned Hillary Clinton a 71% chance of winning the Presidency as late as midnight on election night in 2016. He got roasted pretty hard for that one too.

Anyway, the Super Bowl was an amazing game. In case you’ve been living under a rock, the Kansas City Chiefs have a young quarterback named Patrick Mahomes who is one of the more talented athletes to ever grace a football field. He’s fast, can make throws from almost any arm angle, and has a knack for mounting a comeback when it matters most. All of that was on display Sunday night when, in one of the more improbable comebacks in recent memory, Mahomes put his team on his back and won the sport’s biggest game. Midway through the fourth quarter, however, that didn’t look terribly probable. In fact, it looked almost impossible, which is when Nate Silver sent his ill-fated tweet.

At that point, the Chiefs were down ten points and Mahomes had just thrown an interception…a San Francisco victory was all but assured.

Magic, however, was exactly what Mahomes had in store as he connected on a 44 yard pass to his star wide receiver, scored a touchdown, and then immediately got the ball back only to score again. Oh…then the Chiefs’ running back threw in another score for good measure. 21 points in less than one quarter and a place in history for Mahomes and his teammates.

The reaction to Silver’s tweet was fairly predictable. Here are a couple of my favorites:

What makes these reactions so laughable is that Nate Silver didn’t predict that the 49ers would win nor did he come even close to predicting that Clinton would beat Trump.

What Silver did do, however, was provide a statistical probability that the 49ers could beat the Chiefs or that Clinton could beat Trump. Since our brains are hard wired to think about the world in concrete terms, most people think of the 93.8% probability as a certainty or a prediction…it is anything but that.

To understand how to apply probabilities in every day life a little better, it’s important to know about the work of Carl Gustav Jacobi. A German mathematician famous for his work on elliptic functions, Jacobi was a master of his craft and had a famous saying, “man muss immer umkehren.” In case you are a little rusty on your German, that loosely translates to “you always have to invert.”

Jacobi was so successful in solving complex problems that gave other mathematicians fits because he often approached these problems backwards. He understood that in order to solve complex problems, he needed to think about them from all directions since one’s perspective changes depending upon his vantage point.

Applied to the Super Bowl, this would have meant not that the 49ers had a 93.8% chance of winning but rather that they had a 6.2% chance of losing.

Think about that for a moment…the way it is worded will actually change the way your mind solves for it and how certain it seems. To give it a little more perspective, think of it in the following way:

If the Super Bowl was played from that play forward every day for a year, the Chiefs would win roughly once every other week.  Doesn’t make it seem like as much of a lock as if I say the 49ers have a 94% chance of winning, now does it?

The principles behind Jacobi’s work have all kinds of corollaries to investing since the markets are really just one big math problem that everyone is trying to solve. In fact, Warren Buffet and his business partner Charlie Munger are famous for using Jacobi’s quote in their investing process.

But back to football again for a moment, when Silver sent his tweet midway through the fourth quarter, the 49ers had their commanding lead, a 93.8% chance of winning, and Vegas placed their odds at -$650 to win the game (that means that you would have to bet $650 to win $100).  The lowly Chiefs and their measly 6% chance of winning were being priced at +$750 (meaning you would win $750 if you bet $100). Which one would you have taken: the overly priced sure thing or the cheap bet that few really believed in?

The good news is that if you missed the opportunity to place your wager, there’s a similar proposition available in the equity market today. High-flying growth stocks like Alphabet (parent company of Google), Amazon, and Facebook have spent the past decade becoming the darlings of Wall Street and have provided their investors with eye-popping returns…they’re the 49ers!

Lowly value stocks, on the other hand, have struggled mightily with returns that look paltry compared their growth counterparts…I guess Mahomes and the Chiefs look more like bank stocks and energy companies.

A large swath of the investing population will try to convince you that persistent underperformance means value is dead. Stay away, they tell you. This time is different, they tell you.

Well, to quote John Templeton, “the four most dangerous words in the English language are ‘this time is different’”.

The good news for value investors is that value stocks have some advantages over just betting the Chiefs. First and foremost, the historical track record is a pretty good one. Here’s how value did versus growth over the past 95 years based on rolling one, five, and ten year periods:

There is some historical precedence to value outperforming, although that outperformance is anything but a sure thing (as the last decade has proven). Using Jacobi’s logic, it shouldn’t work a lot of the time and so what we’ve seen of late shouldn’t surprise anyone out there…it’s simply the price of admission.


Second, if you implement value appropriately, it still allows you to own some of the growth winners, albeit on a smaller relative basis. We rely pretty heavily on our colleagues at Dimensional Fund Advisors to provide exposure to value in their funds, while not necessarily owning only value. Think of this implementation approach like a tray of ice cubes…they tilt the tray slightly so that there’s a little more water in the value cubes, but not so much so that the growth cubes disappear. Here’s how Dimensional weights the largest growth stocks in their core US fund (ticker symbol: DFEOX) versus how they’re weighted in the S&P 500:

So, if you implement appropriately, you’ve got both bets covered…with a slight tilt towards the Chiefs.


Finally, value just intuitively makes sense whereas betting on a big comeback with less than 7 minutes left maybe doesn’t (those out there with $750 in their pockets will probably disagree!). You would have a hard time convincing me that something that is more expensive is actually a better value given that a cheaper option is available. Here’s how growth compares to value on a relative basis right now: 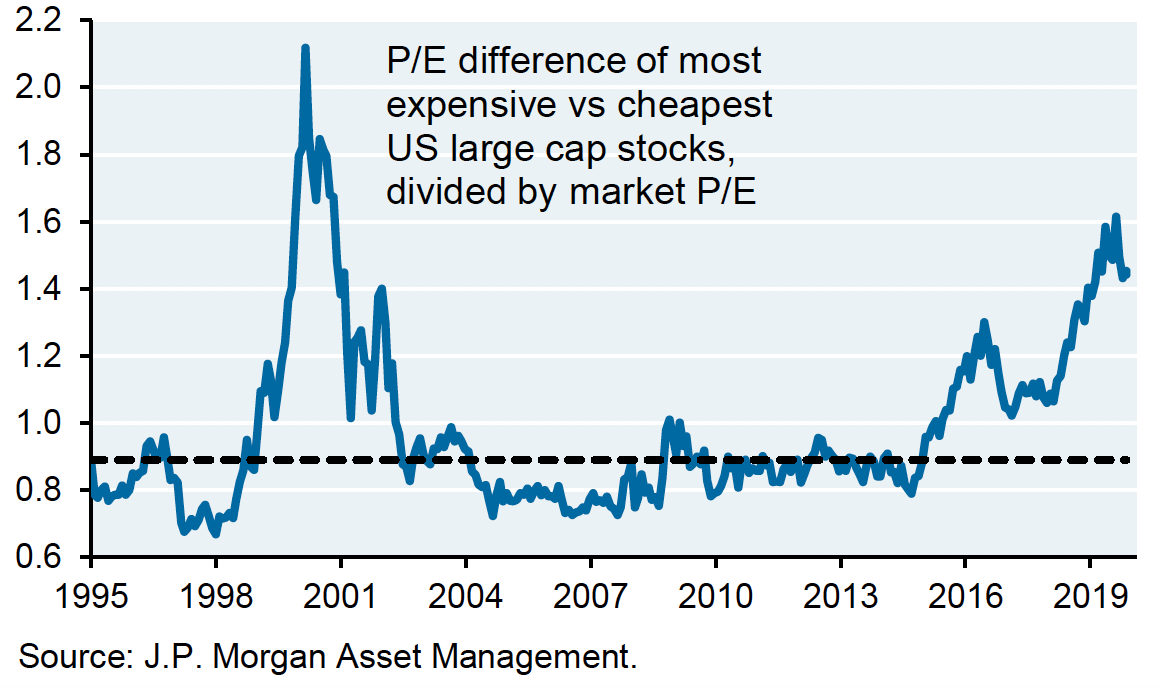 As the chart notes, growth isn’t quite as overdone as it was in the tech boom of the late 90’s but we sure are getting closer.  Place your wagers accordingly…


The bottom line is don’t give up on value stocks just yet…they may have some of that Mahomes magic left in them!