Ted Williams was undoubtedly one of the greatest hitters in the history of baseball.  You can argue that Ty Cobb or Babe Ruth were better but one there is one thing that can’t be argued: “The Kid” or “Teddy Ballgame”, as Williams was affectionately known, was the model for hitting consistency over his 4 decades in baseball (he started in 1939 and retired in 1960, just barely allowing it to count as four decades!).  Across 19 professional seasons, he hit over .300 in a full 18 of them (the one exception being the 1959 season when, at age 40, a pinched nerve in his neck caused a .254 season at the plate).

He was a career .344 hitter, the last man to hit .400 for an entire season, and is still the career on base percentage leader with an eye-popping stat of .482 in that category. The body of work speaks for itself and is simply incredible relative to his peers…and all of that was accomplished without his ability to play from age 24 to 27 because of his illustrious service to our country during World War II.

What the stats don’t highlight, however, are all of Teddy Ballgame’s failures throughout his career.  Hoo boy! are there a lot of them:

A full 5,052 times, The Kid came up to the plate and didn’t reach base in any fashion; that happened, on average, more than twice a game.

709 times over the course of his career, he had three chances at a strike and missed all three, striking out, on average, once every three games.

And batting average? You would have crushed it in Vegas betting on him to NOT get a hit each time he strode to the plate since more than 65% of the time he stood up there, he couldn’t sniff one.

Seemingly constant failure, lackluster short term results, and at least something to be disappointed about in every game…all leading to a Hall of Fame career. This can only lead us to one conclusion:

Like Williams, diversification is stable, reliable, and totally crushes it on a risk-adjusted basis over the long term… but always has a reason to feel bad in the short term. Diversification is hard because, by its very nature, it means we will always have something in our portfolio that is underperforming another part of the portfolio. It means always having to say we’re sorry and always being disappointed.

It means not getting on base… a lot of the time.

Back to The Kid for a minute though… specifically September 28, 1941...it’s the final day of the regular season for the Boston Red Sox and it’s a doubleheader. Williams enters the day hitting .3995 (which would have rounded to .400), but still insists on playing that day so he can cement his .400 batting average for the season the right way (weird...part of that whole "Greatest Generation" thing I guess??).

He comes to the plate 8 times that day and fails to get a hit twice.  25% of the time that he walked away from the plate that day, fans were left to wonder if he still had the magic.  Was this it?  Would he fall below the .400 mark and put history in jeopardy?  Alas, The Splendid Splinter ultimately collected 6 hits across the two games and history was made.

Over the course of the past 30 years, a simple 60/40 portfolio of stocks and bonds (rebalanced annually) has shown a compounded annual return of 8.57%. Staying the course over that time period means your money has increased almost 12x… not bad for a few decades worth of work. Here's what that almost 12x return has looked like: 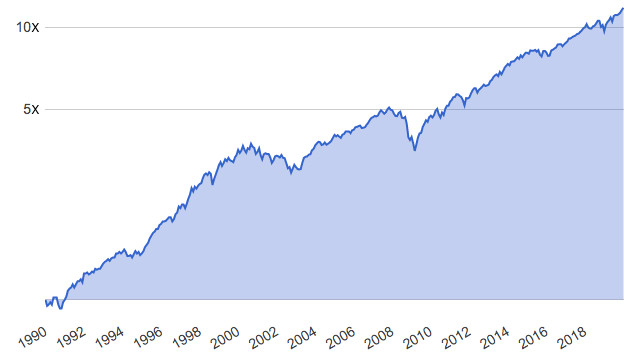 It looks easy but, just like Ted Williams, that beautiful chart contains some periods of incredibly underwhelming results:

In every single one of those 30 years, one of the two assets classes (stocks or bonds) outperformed the other and you were left wondering why you owned the underperforming one at all.

A full 11 times, one of the two asset classes showed a negative return for the full calendar year. Yup, more than 33% of the time you were left with a loss in around half of your assets.

And most alarming were the 7 times that your 60/40 blend showed anoverall negative return for the year...a full 23% of the time!

Yes, on average, almost once every four years we’ve been left to wonder why diversification is dead. But, to borrow a line from Mark Twain, “reports of its death have been greatly exaggerated.”

So don’t fret the next time the markets encounter a bump in the road; eventually they will hit their average…just like good ol’ Teddy Ballgame.