The trade in equity markets to start the week has been pretty awful.  The Dow is down around 2,000 points (I actually don’t know exactly how many points it’s down since basically no professional investor in the world uses the Dow for anything other than to answer the question “how did the market do today?”) and everyone seems to think that the world is imploding due to the unchecked spread of coronavirus. Markets have had that orderly selling feeling where they just basically sell down all day and you slowly watch your net worth march a little lower. This, I would point out, is a preferable outcome to the disorderly market panics that we’ve seen over the years where markets whipsaw investors with volatility, only to end even lower. Or maybe it isn’t…I don’t know. Losing money either way isn’t much fun.

Anyway, when markets start to get rattled like this, someone in my business is supposed to respond in one of three ways:

1. Send out a note comparing coronavirus to previous global pandemics and show you how the markets responded to those (hint: they did well).

2. Send out a note from some sort of expert/investment strategist/person with a big title at their firm and opine on how the virus might spread and what that could mean for operating earnings on the S&P 500.  (hint: they’ll tell you that there’s a small risk for a major disruption but they don’t think it’s likely at this time and they’ll take their EPS estimate for the S&P down from $177 to $176 for the full year.)

3. Send out a note with some sort of actionable trade idea as a way to profit from this mess. (hint: it won’t work but the backtest they show you will look amazing!!)

As you have probably guessed by now, I don’t plan to do any of the three. Look, these types of sharp pullbacks aren’t fun but they are a normal and healthy part of the investing process.  If there was no volatility then there would be no risk and if there was no risk then equities would basically trade like T-bills…and offer no return above cash.

But everywhere you look in financial media, there seems to be some reminder of how ugly the trade is out there right now. There is none I enjoy more, however, than CNBC’s “Markets in Turmoil” graphic that they trot out every so often. You know...this one: 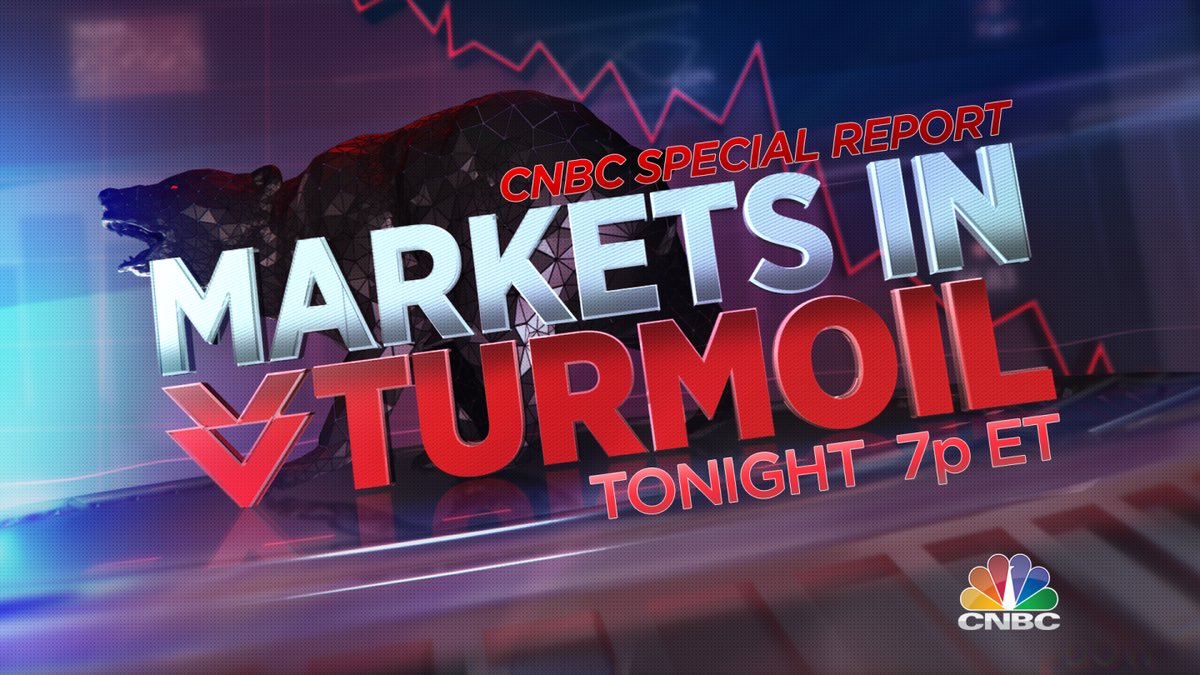 The red ink, the scary looking bear, and the downward sloping line…it is designed to grab eyeballs and play on our worst instincts as investors.

I’m not sure if markets are in turmoil so much as they are just doing what markets do from time to time, which is to offer incredibly volatile and poor short-term returns.

There is a guy that I follow on Twitter (h/t @charliebillelo) that tracks how the market does following these “Markets in Turmoil” segments. According to Charlie, here’s what CNBC’s track record looks like over the past ten years: 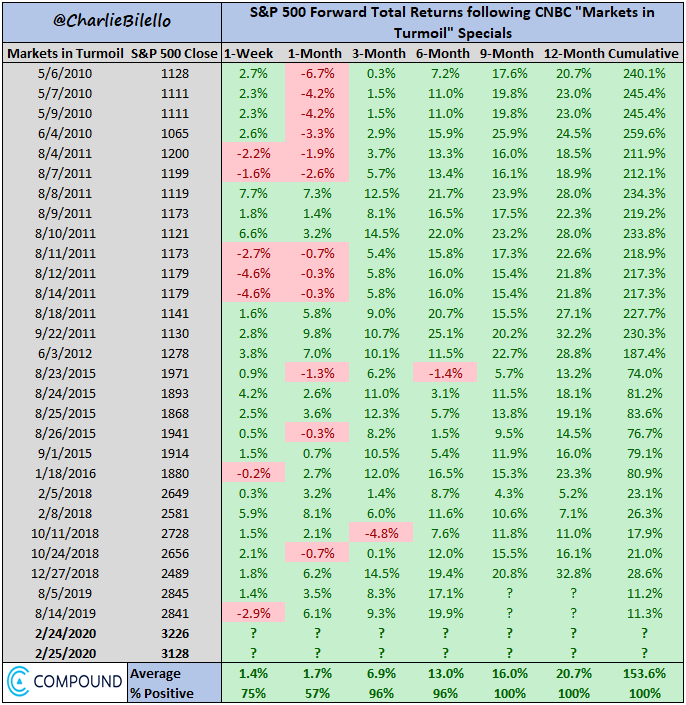 Just something to keep in mind next time you’re flipping through the channels and pass by CNBC (just keep flipping).

I really try to avoid predictions but I’ve been asked a lot this week about what I think the big risks are at the moment due to coronavirus so here’s my take on what I view as the big one:

The risk right now is not in a global pandemic that causes mass death and destruction, but rather one that severely cripples supply chain dynamics for an extended period of time, causing prices to move higher and the dreaded “i” word to come into play. Yep, you guessed it…inflation.

Supply chains are non-linear in nature, meaning that if, for example, a part is backlogged for two weeks, that doesn’t necessarily mean that the end customer’s receipt of that product is subsequently delayed by exactly two weeks as well. Rather, there is a domino effect of sorts that takes place whereby whomever that supplier is selling to is waiting around for the part to be sent to them, which in turns slows down their process and how quickly they get their product out to the next supplier, and so on and so forth. Imagine the issues this causes for complex product manufacturers like computer companies or car companies that require hundreds of different components from dozens of different manufacturing partners.

Since most manufacturing companies don’t keep excess inventory on hand, it means that supply channels can slow incredibly quickly, while demand also slows but at a slower rate; the disconnect between the two is what could temporarily drive prices higher. Normally, I would say this is basically just a transitory factor that leads to nothing more than moderately higher prices in the near term…but we are living through anything but normal times.

No, the knock-on effect of all of this could be larger than it normally would be because central banks around the world are still expected to be crazy accommodative in the form of ever increasingly lower rates…the trade in interest rates has only gone one direction and that is down. The Fed’s balance sheet is approaching the largest it’s ever been as they continue to inject liquidity into the system to supplement their rate policy largesse. If you want to see some serious carnage in markets, let inflation rear its head and force the Fed’s hand to raise rates to combat it.  Markets are currently pricing in three rates cuts before year-end and inflation breakevens are their lowest in history so it doesn’t take a PhD in economics to figure out how the world is positioned for the above type scenario.

(Quick note: I am not making a prediction that the above will happen…I actually think it’s a “black swan” type of event and thus incredibly unlikely.  I am simply saying what could happen if I had to pick out a risk that I don’t think markets are necessarily well-positioned for.)
So what should you do about all of this?  Well, if you’re a client of ours, the answer is nothing.  We design portfolios with a myriad of risks in mind and the inevitability of market pullbacks is one of them.  If your portfolio isn’t prepared for at least some type of slowdown then we aren’t doing the job that you hired us to do.

If you’re not a client of ours and you’re worried, then drop us a note.

In closing, markets will probably continue this ugly trade for a while…we’ve been due for a pullback for some time and we’re getting it now.  Take a breath, tune out the noise, and focus on what matters…you’d be surprised how little actually does.