The LEGO Movie debuted in 2014 to rave reviews.  As the Rotten Tomatoes website commented, "Boasting beautiful animation, a charming voice cast, laugh-a-minute gags, and a surprisingly thoughtful story, The LEGO Movie is colorful fun for all ages." The movie is fun with some drama and heart to go along with it. I watched the movie with my kids this past weekend and found it to be a nice escape from the “all things corona” world that we’re living in.

The movie focuses on an ordinary Lego minifigure who finds himself helping a resistance stop a tyrannical businessman (masterfully played by Will Ferrell) from gluing everything in the Lego world into his vision of perfection.  The soundtrack that goes with the movie is led by a song called Everything is Awesome!!! The lyrics go (in part) like this:

It’s equal parts annoying and catchy.  You can have a listen here.

But the LEGO Movie isn't just a dystopian commentary on an imaginary world... it's also a perfect description for the market environment we're currently navigating. Here's my take...

The disconnect that exists between what is happening in the broader economy and the stock market is beyond staggering at this point.

There’s a lot to unpack here but I think there are basically three key components to understanding why this is happening:

Here's what I mean:

Big Business is Getting Bigger

Small businesses make up a major part of the US economy. According to the Small Business Administration, small business activity accounted for around 44% of GDP in 2019.

But small businesses are subject to different forces than big businesses and they don’t get nearly as much attention from the financial media. Small businesses can’t access credit as easily, their balance sheets aren’t nearly as robust as their larger counterparts, and no one small business poses a systemic risk to the broader economy. That last point is probably the most important one as corporate bailouts have become the norm rather than the exception over the past couple of decades, only making big businesses bigger.

To understand this better, think back to 1998. That was the year that a hedge fund called Long Term Capital Management blew up and left a whole lot of market chaos in its wake. There was concern that the problem could have actually become much wider spread than it already had, given LTCM’s exposure to various banks.

A lot of really smart people started to lose a lot of money.

Warren Buffett even got involved.

Eventually, cooler heads prevailed and a meeting was organized amongst the heads of the largest financial institutions at the time. A deal was struck by the Federal Reserve Bank of New York and a bailout of $3.6 billion was arranged in order to keep markets functioning and in good order. Here’s the newspaper headline from the next day: 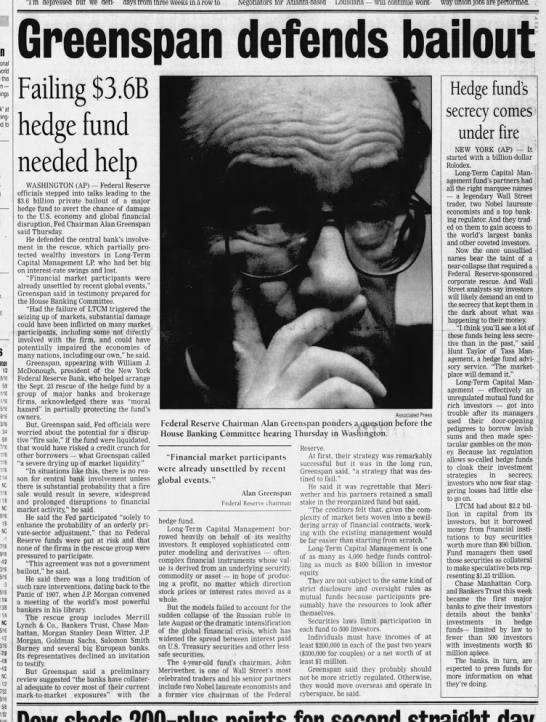 Greenspan was forced to defend that??  A $3.6 billion bailout seems almost quaint at this point.

But that bailout was a little bit different from the ones that we’ve seen over the past couple of years because, even though it was organized by the New York Fed, it involved capital from the private sector and, thus, they were on the hook for at least a portion of the losses. A common argument from bailout critics is that they create perverse incentives by offloading losses to the public sector, while keeping any potential profits for the private sector. While that’s only partially true (see: Fannie and Freddie), this “heads I win, tails you lose” business environment has served as a reasonable explanation for why big businesses have become even bigger over the past 20 years or so.

A better argument for why businesses are getting bigger at this very moment, however, is twofold: their smaller competitors are simply falling by the wayside and the Fed is making it insanely cheap for them to borrow and continue to grow.

Here’s what each means for the markets:


Their smaller competitors are simply falling by the wayside.

The government recognizes this and is attempting to stop it. They instituted the PPP lending program, sent out stimulus checks, and provided unemployment assistance for independent contractors. While all of that has helped, they can’t completely stop the natural forces at play in the economy.

The data around small business closures is notoriously difficult to track since when many small businesses fail, they opt to simply close their doors rather than go through a formal bankruptcy proceeding. The recent data isn’t encouraging though.  As this Bloomberg article points out, Yelp reported 80,000 permanent business closures over the course of the past five months, 60,000 of which were firms with less than five locations. That’s a reasonable assessment of where we stand – it isn’t pretty for small business.

As those firms go by the wayside, bigger businesses are there to pick up their customers, inventories, etc. and the business moves up the food chain. Whether it’s Amazon’s swelling annual sales or the balance sheet largesse of the biggest banks in the country, this trend is clearly increasing, and it isn’t a positive one for the little guys.


The Fed is intervening in corporate debt markets, making it insanely cheap for big businesses to borrow.

This is an easy one to understand using the following example:

Alphabet Inc. (the parent company of Google) sold 5-year bonds at a yield of 0.45% last week.

The only reason they were able to do this is because the Fed has dropped rates to zero and provided an unprecedented amount of support for the corporate bond market by buying bond offerings from large issuers. Basically, the market knows that the Fed is standing behind these companies if they have a problem and so rates just continue to grind lower since the risk is considered to be so low.

As David Dayen masterfully pointed out in a recent article, “The Fed is intervening in large corporate debt markets because it allegedly has to, but not intervening in smaller lending markets. Similarly, the Fed isn’t doing much lending in the Municipal Liquidity Facility (MLF), despite dire needs in state and local governments. So the biggest corporations are benefitting from a subsidy while everyone else is subject to the whims of the market.”

The S&P 500 is a market cap weighted index, which is to say that the larger a company becomes, the greater its weighting in the index. As big tech companies have gotten bigger, their relative weightings in the index has continued to increase. To wit, the five businesses that make up the FAAMG moniker (Facebook, Amazon, Apple, Microsoft, and Google) have come to comprise nearly one quarter of the entire S&P 500.

One easy way to understand just how much of the S&P 500’s return has been attributable to these companies becoming so much larger is to look at the equal-weighted version of the index versus the cap-weighted version. The exercise is simple: rather than allowing the bigger companies a larger share of the index, we simply give each of the 500 components an equal 0.2% weighting in the index. The results on a year to date basis look like this:

The market cap weighted version outperformed by a full 8% just over the past 7 months which is an indication of just how important big tech has been to the rise in the index.

It almost intuitively makes sense why we’ve seen big tech continue to dominate in a Covid-19 world: low interest rates have raised the present value of their future earnings streams and more services have flowed online as a result of no one being able to leave the house.

Will the trend continue? It’s anyone’s guess. I’ve argued for a while now (incorrectly, I might add) that the valuations being fetched by companies like Amazon and Facebook don’t seem reasonable even if they continue to grow at their already astounding paces.

The Stock Market Isn’t The Economy

This old adage is undoubtedly the easiest way to explain the dichotomy between the market and the economy. The stock market is forward-looking and economic data is generally backwards looking. The friction that exists between the two can obviously lead to large divergences in their performance.

But it does seem a little strange that the economic data is still predicted to be as bad as it is, and the market continues to grind higher in the face of that. The only explanation I can give you for this is that the trend in data is really what matters more for equities, rather than the actual data itself.  What I mean by that is that if it looks like things are directionally improving, then it’s reasonable that prices should incorporate that data and, all else being equal, probably move higher.

Take unemployment data, for example. The unemployment numbers that started to come through in March and April were absolutely horrific. Continuing claims (basically, people who filed for unemployment in a given week) peaked at close to 25 million the first week of May and have steadily declined since then. The most recent weekly claims data was closer to 15 million, which is still higher than any other pre-Covid point on record (more than twice the previous high seen in 2009) but 15 million unemployed is sure a heck of a lot less than 25 million unemployed.

So, since the data is forward looking, investors are looking at it and saying, “the world seems to be improving… I guess I should buy something that would benefit from that trend.”

To be clear, I’m not saying I agree with this line of thinking. Rather, I’m trying to give you an explanation for why 15 million people looking for work all at the same time could be considered a good thing for equity investors.

We’re living through this crazy time and this is truly the LEGO market. Everything is awesome and cool… being on the market team does feel like a dream, in many respects.

But regardless of whether it’s a dream (market) or a nightmare (economy) out there, my advice to you won’t really change:

And take the long view.