When it comes to markets, no one knows anything and I have the data to prove it.  Think I’m wrong?  Read on!

Jeffrey Gundlach is easily one of the most successful and famous investors of the past couple of decades. He launched DoubleLine Capital to much fanfare in 2009, after a famous flameout (and subsequent super crazy lawsuit) at TCW.  Over the course of the past 10+ years, DoubleLine has become synonymous with bond market success, consistently putting up market beating returns (full disclosure: I am a big believer in DoubleLine and invest in their funds both personally and on behalf of clients). Gundlach is even referred to by some as “The Bond King” for his market prowess; he is extraordinarily bright and talented, a market whiz if there ever was one.

Here’s the thing though…even with that success, he is wrong about his market calls all the time. Don’t believe me? Allow me to prove it to you with this article from Bloomberg detailing some of the wildly incorrect market calls that he made just this past year alone.

The good news for Mr. Gundlach, however, is that he isn’t alone on Wall Street. Some of the brightest minds in the world of finance have no ability to predict markets any better than he does…in fact, most of them are way worse.

And to prove that, I’ll give you an empirical example this time…

The Philadelphia Federal Reserve administers an annual survey of the 30 or so leading economists on Wall Street. The participants in the survey come from some of the most prominent institutions in the world of finance…think Goldman Sachs, JP Morgan, etc. Among other questions, the survey asks a fairly simple one: what will the yield on the 10 Year Treasury be one year from now?

Spoiler alert: not only do they almost always whiff on what the rate will be, more often than not, they’re even wrong about the direction that interest rates will move!

Here’s how they’ve done predicting just simply which direction interest rates will move since the inception of the survey in 1992: 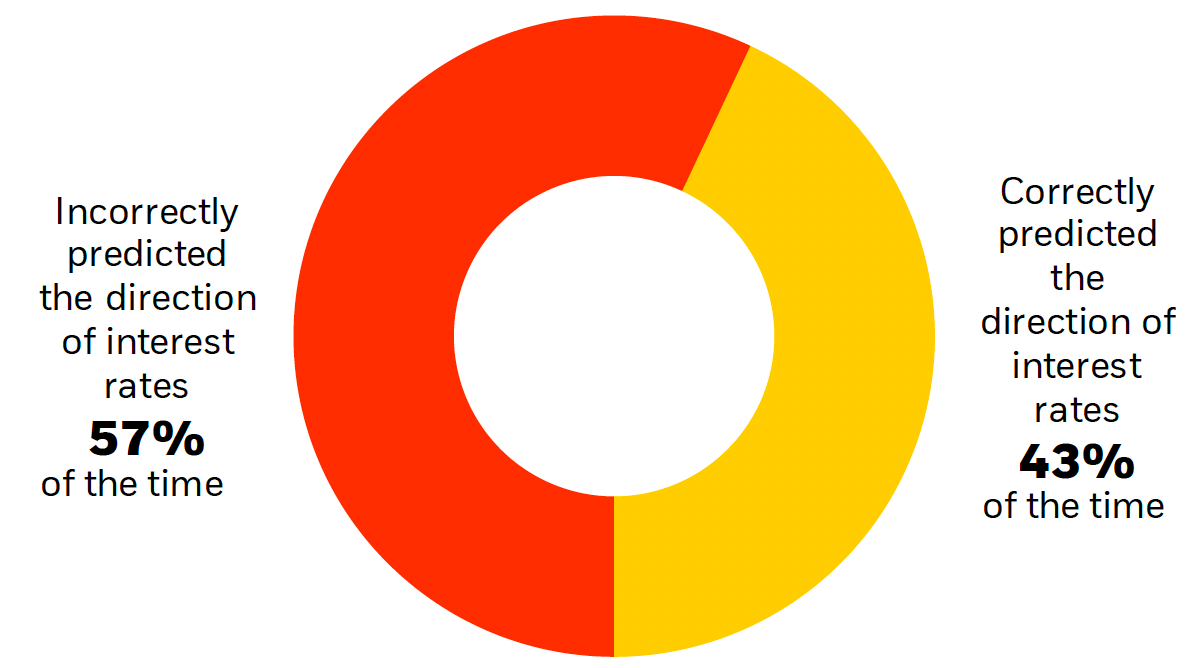 Now, these are the smartest and most accomplished economists in the world, utilizing some of the most advanced financial data and models available to come up with their predictions…and they are reliably wrong more times than they’re right.

Doesn't say much for the experts, now does it??


So the next time someone tries to tell sell you on their ability to predict what will happen next, you can tell them that no one knows anything…and now you even have the data to prove it.

How can we use this to our advantage to drive to better investment outcomes? It's easier than you probably think!

Get in touch today and we’ll let you know how.