Pablo Escobar was one of the most legendary and ruthless drug dealers to ever walk the face of the Earth.  At the peak of his powers, Escobar controlled over 80% of the cocaine that flowed across the globe, bringing in an estimated $420 million per week in revenue. To get a sense of scale (adjusted for inflation), Escobar’s cartel generated more in annual sales than companies like Goldman Sachs, Pfizer, or Facebook do today.

Clearly, running an organization of that size and level of illegality requires an almost obsessive focus on costs… there is obviously huge “slippage” in attempting to run an illegal import/export business. There are officials to bribe, distribution chains to pay, and ransoms to negotiate. Once all of the expenses are paid (and there’s a lot of money left over!) then the really hard question has to be answered: Where do you put all of the money?

For Escobar the answer was simple: Everywhere.

He stored it in boxes buried in fields, he stored it in wells, he stored it in dilapidated warehouses, and he stored it in the walls of his cartel lieutenants’ many homes spread across the globe. He stored it anywhere he could with the understanding that very few people actually knew where the money was and those that did were too terrified of him to steal it anyway. It was, in his mind, safer in its many hiding places than it would be in a bank.

When US authorities began unwinding Escobar’s web of illicit activities, they eventually found a way to wiretap some of his phones. When they did so, they found a man obsessed with “rats”. They would listen, at times dumbfounded, to his complaints about these “rats”. Their sneaky ways of getting around him, their obsession with his money, and the carefree nature with which they operated. He wanted them dead…all of them. For a short time, DEA agents believed that they might have a mass murder on their hands in no time flat.

What the DEA agents didn’t realize at first was that Escobar wasn’t talking about turncoats from the Medellin Cartel…he was talking about actual rats…like, as in, the rodents. You see, one of Pablo Escobar’s biggest problems was that rats were eating his physical cash…and in really large quantities. In fact, most estimates from his associates were that they lost somewhere around 10% of their annual revenue to the destruction of physical cash, mostly due to rodents eating it.  That’s $2.2 billion annually going into the rats’ stomachs!

It turns out that one of the world’s most brilliant and ruthless businessmen had accounted for all of the risks inherent in moving around that kind of cash except for one small one…the rodents crawling around his money.I’ve written a lot about my kids on this blog; we have three boys and I couldn’t be prouder of all three of them.  They are all so different but they share one common trait – they are all terrible sleepers.  I have never understood why they can’t just go to sleep at a normal time, sleep through the night, wake up feeling refreshed, and then do it all over again the next day.

Our current challenge is with the two year old, Everett. He is a very sweet little boy who makes his parents into zombies on an almost nightly basis by sleepwalking into our room. The strange thing we’ve noticed, however, is that if for some reason he can’t open the door, he immediately goes back into his bed and falls asleep.

We decided to get smart last week and bought a plastic assembly to put over his doorknob that would prevent him from getting out of his room in the middle of the night. It’s a pretty straightforward contraption that attaches over the doorknob and makes it effectively impossible for small children to open…all small children except for Everett, apparently (herein referred to as “Little Houdini.”) One night spent with that thing and he was out of his room in no time.

Desperate times call for desperate measures and so the next night we decided to wrap duct tape around the doorknob, making it impossible for anyone (including even “Little Houdini”) to exit the room when the door was closed. This was a foolproof plan if there ever was one, allowing us to keep him in his room (don’t worry, we have a camera on him at all times so we know he’s safe) and get a decent night’s sleep. Here’s photographic proof of our ingenuity: 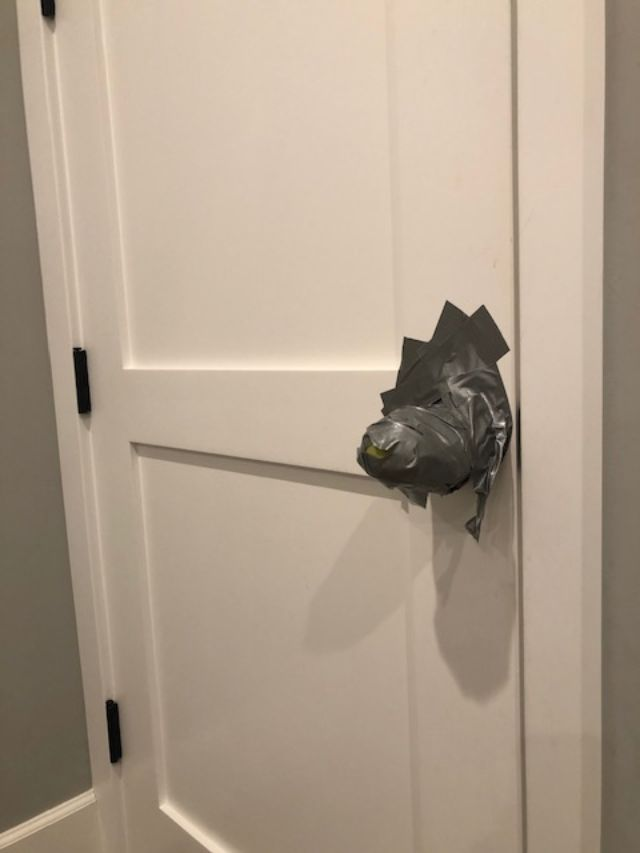 On Saturday night, he woke up at 2:30 AM and approached the door to perform his nightly ritual of wandering into our room. Except this time, our plan worked. He shook and shook but couldn’t get the door open. He made some noise for a little while but then something happened that we hadn’t seen before…he fell asleep on the floor in front of the door. After waiting an appropriate period of time, I went into his room to put him back into bed…

I accidentally let the door close behind me.

I’m going to stop now and assume that you can imagine what a 38 year old man looks like at 2:30 in the morning attempting to unravel a duct tape covered doorknob in the dark. It is not a pretty scene. After 10 minutes spent wrestling with the duct tape and the doorknob, I successfully opened the door… and fully woke up Little Houdini and his two brothers in the process.

I never thought I would find much common ground with Pablo Escobar, but there I was at 2:30 in the morning wondering how the foolproof plan that I made had gone so wrong. You see, Pablo and I both made the same mistake…

We didn’t look to the second order effects of our actions.

Second order effects can most easily be described as the consequences that result from an action’s initial consequences.

In my case, I made the decision to prevent my child from exiting his room, which resulted in him falling asleep in an undesired location. The consequence of that was that I had to go into the room to move him and risk the door closing, preventing me from getting out when it was time to leave.

Best laid plans gone to waste.Second order effects have drawn a lot of headlines (and created a good bit of controversy) lately…they’ve looked something like this:

Consequence: People listen to the authorities and so they stay home and don’t do anything

Second Order Effect: The economy suffers because no one’s doing anything

That’s an oversimplification but it’s true. The second order effects of social distancing have thus far been devastating for economic growth, the slowdown of which looks to be roughly in-line with what we saw during the Great Depression.

I read a lot of analyses of the potential impact of coronavirus right before this whole thing started and I don’t remember any of them mentioning a complete shutdown of the global economy as a second order effect of the virus. A slowdown, yes… a complete shutdown, no. But that’s exactly what’s happened. On the one hand, this further proves my theory that no one knows anything. On the other hand, it’s a pretty decent lesson in risk.

If you’ve been reading this blog for a while then you have read this before but it bears repeating:

Risk is the idea that more can happen than will happen.

Because it encompasses everything that can happen, it’s impossible to fully understand risk because much of it is made up of things you haven’t thought of or things that haven’t happened before. As one hotel company CEO recently put it, “we had some really smart people that ran some great risk modeling for us…unfortunately none of those models included a government-mandated shutdown on travel that moved revenues to zero overnight.” That’s unfortunately what happened though.

As individual investors, it’s vital that we understand portfolio risk as well as we can but with the caveat that we can’t know everything because much of it is actually unknowable.  Thus, we can never fully understand the risks inherent in anything we own.

Diversification helps a little bit with this as it takes much of the guesswork out of what will work and when. Good financial planning goes a step further and allows us to better understand what that diversification actually means for us and where risk should actually be taken.  But even the best allocators and planners can’t account for everything.A client recently asked me how I was personally allocated in the current environment given all of the volatility that we’ve seen in markets.  The truth is my allocation hasn’t really changed much.  I have an almost uncomfortable amount of risk in my longer-dated assets (e.g. my retirement accounts, long term savings vehicles, etc.) and an infinitesimally small amount of risk in my shorter-dated assets (e.g. checking and savings accounts, etc.).  This is pretty much an evergreen allocation and I don’t really give it a whole lot of thought, other than making periodic adjustments when I believe opportunities present themselves.

My most risk-averse money though… the money that’s really fool-proof… is the small amount of physical cash and gold that I keep in a fireproof safe. Only my wife and I know the code to the safe and if the world ever looks like it’s going to end, we know we at least have a little something that no one can touch…unless of course the rats get to it.