If you haven’t done so yet, take a moment and watch John Krasinski’s new project, Some Good News.

The news has been awful of late…so much death and destruction every day that it baffles the mind. Krasinski offers up some much needed good news and laughs. The last five minutes of the show contain a performance from the cast of Hamilton (via Zoom) that will absolutely blow your mind. We saw Hamilton in New York a few years ago and it was brilliant. Start your day off with some positivity and I promise you won’t regret it.

Now back to the misery…

We’ve been through an incredible amount of volatility in a really short period of time. Last month already feels like a lifetime ago and the news surrounding both coronavirus and the markets seems to change by the minute. It is hard to keep perspective amidst all of this because we’re all subject to our own inherent biases and we’re all just trying to get by in our “new normal”.

Some really crazy stuff has been happening of late though in both markets and the broader economy…I’m not making that up. Consider the following examples:

6.6 million people filed for unemployment last week.  To give you a sense of the scale of this, the worst week we had ever seen before this past one was a loss of 695,000 jobs in one week in 1982. For those of you wondering, the worst week of the 2008 financial crisis was a loss of 665,000 jobs. Here is what last week’s claims number looks like on a chart going back 50+ years: 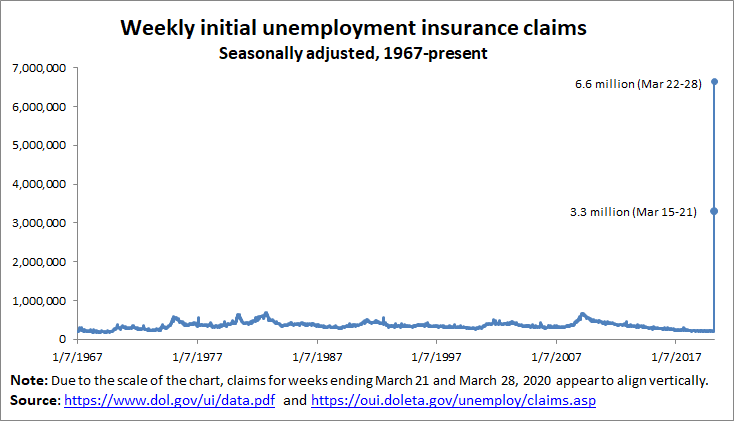 Oil prices moved 40% higher from Wednesday through Friday of last week.  Granted, they were at historic lows, but come on…

Last week, TSA reported total travelers screened in airports was down 93.5% year over year.  On average, they get over 2.2 million passengers per day passing through. Now it’s down to around 150,000 per day…and falling each day.

Last week’s domestic box office total was $5,058…for the entire country. That’s down from $184 million the same week a year earlier.

There were 3.74 million national instant background checks for firearm purchases performed in the month of March.  That’s almost double the average month (2.02 million) since the system was put in place. Yet another sign of the fear people are feeling right now.

These are just a couple of random data points but they exist so far away from any kind of normalcy that it’s hard to contextualize them or, at an even more basic level, understand the effect that any of this will have going forward since we’ve never seen it before.  The only thing I can tell you with any certainty is that all of us are bearing witness to history.


We’ve been trying to find ways to get the kids out of the house as much as possible since my kids are borderline insane under the most normal of circumstances…sprinkle some mandatory stay at home orders on top of that and you’ve got yourself quite the perfect storm of craziness. Anyway, I went out and bought all of us bikes last week so we can have something to do outdoors together. When I went to the store, I got into an interesting conversation with the owner. He told me that in the last two weeks, he had more orders for new bikes than he had in the combined six months prior.  He also told me that bounce back from the recession would be swift since people are clearly still looking for things to buy.

Contrast that conversation with one I had the same day with a friend who does commercial property leasing for retail tenants. He told me of the carnage in the market he covers, how tenants were just walking away from leases, and how so many landlords were eventually just going to have to give their unoccupied properties back to their lenders. He lamented the fact that there will certainly be an inventory glut in commercial real estate for years to come…and that was the best case scenario.  He also told me that the recession would be much worse than feared given that the issues in the real estate industry would take so long to resolve.

These conversations illustrate the inherent difficulty in managing a portfolio in a period such as the one we’re currently in. We’re all inclined to be influenced by our own experiences, and seriously biased as a result, in the best of times…those biases are only magnified in the worst of times. The likelihood is that things will probably end up somewhere worse than the bike store owner’s view but not quite as bad as the real estate representative’s view. The trick is figuring out which direction things will tilt over the period of time that matters to you (hint: it’s probably worse in the short term and better in the long term).


It’s tough to have any perspective at all in times like this but the volatility we’re seeing is no joke; I think I’ve become almost immune to the 5% daily swings but they’re undoubtedly historic in nature. Here is a chart of the 50-day average percentage move in the S&P 500 going back to 1928 (h/t Bianco Research): 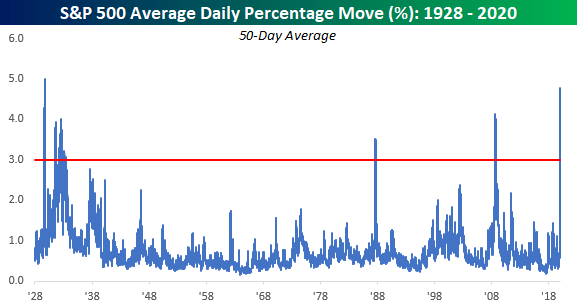 So, this most recent period has actually been more volatile than 2008, 1987, or any of the other market calamities of our lifetime, save for the Great Depression.

In my note last week, I talked a little bit about where to start buying.  High yield has bumped a little higher this week but the valuations are still pretty compelling even if things continue to get worse, which they almost undoubtedly will.  The week before last, I wrote about the compelling valuations offered in high quality municipal bonds. Those values have largely vanished as the market corrected pretty quickly and the best deals got snapped up before most even knew they existed. There will continue to be opportunities like these and I will (hopefully) continue to identify and write about them to the best of my ability.

My best advice for this week, though, is a little more broad:

It’s too easy to stay frozen in a time like this, too scared to make the wrong move. Historic moments like this require decisive action. Take a look back at your plan…now isn’t the time to make a new one but rather to analyze the one that you originally designed. Is it working? If not, why isn’t it? One common flaw I’ve seen a lot lately is portfolios designed with credit-sensitive bonds as the portion of the portfolio meant to control risk. Only cash and short duration, high quality bonds can do that in a time like this.

So go outside, take a breath, and try to gain some perspective…

And then do something.