If you’ve been reading this blog for a while now then you know that I love golf.  Actually, I am obsessed with golf.  My relationship with golf can best be summed up by Arnold Palmer’s famous quote… 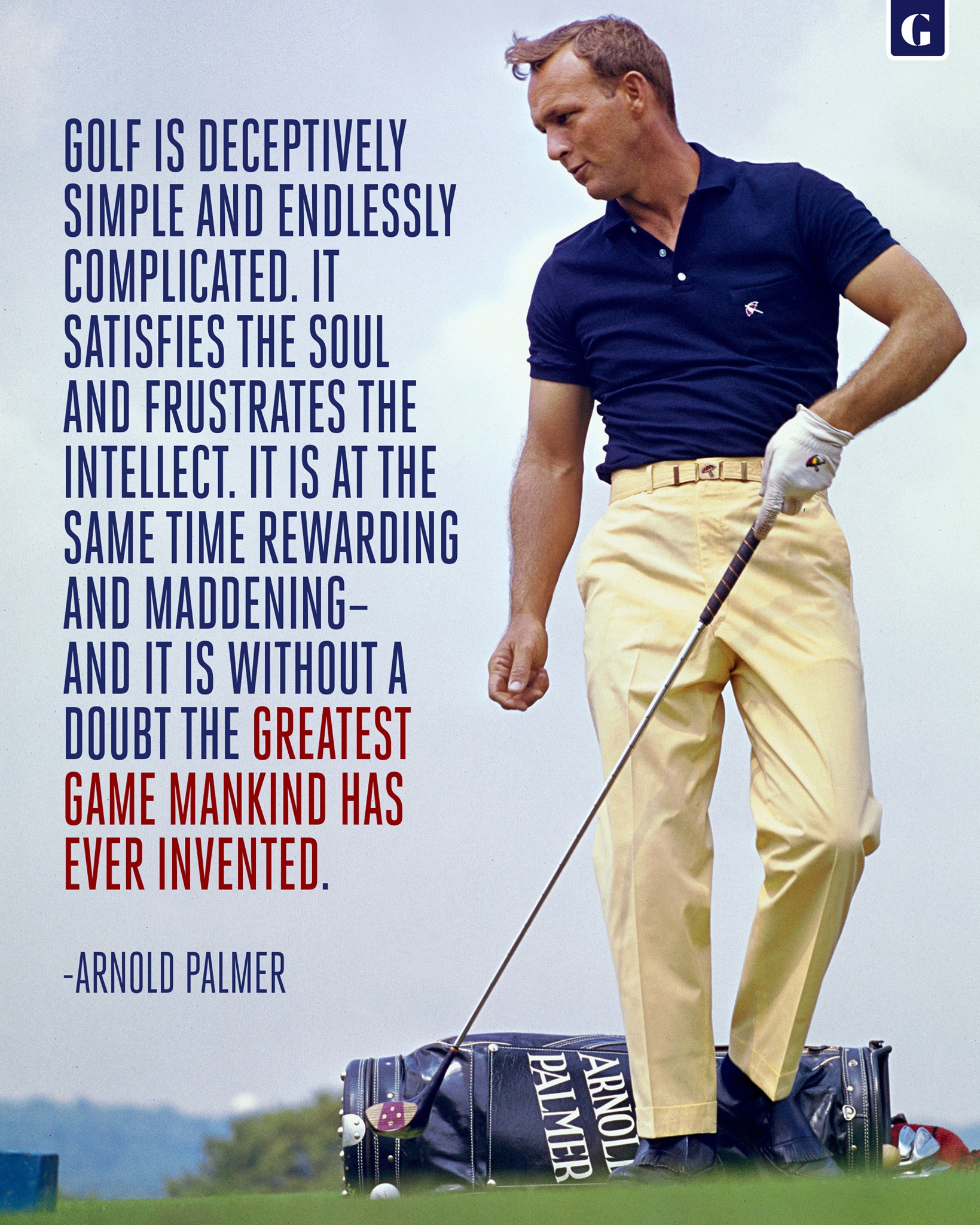 But even with as much as I play golf…

And even with as much as I love golf…

Tour players are a different breed. They eat, sleep, and breathe golf all day, every day. They wake up every morning trying to get better. They practice until their hands are numb. They never get bored of it. There are thousands of them out there but only the top 125 each year receive their coveted PGA Tour card.

In order to make it to the Tour and keep your card, you have to basically play perfect golf…

But even if you play perfectly, you’ll never be Tiger Woods.

In his prime, Tiger was the best to ever play the game and it isn’t worth arguing over.

From 1997-2009, Tiger was 134 strokes under par in major championships. His next closest competitor (Phil Mickelson) was 99 strokes over par during that same timeframe. A full 233 shots worse!

Since the Tour started keeping track over 30 years ago, there have only been eight instances of a player beating the field average by more than 2.6 strokes per round for an entire season. All eight were Tiger.

During the same 1999 to 2001 time period, the second ranked golfer in the world was closer in ranking points to the 1,000th ranked player than he was to Tiger.

It’s hard to wrap your head around these statistics but they’re all true.

Tiger Woods was the best we’ll ever see.

And then, in an instant, it was all gone.

That’s also the easiest way to lose a lot of money.

But, if you have the guts to do it, you can make yourself fabulously wealthy.

So goes last week’s story in the Wall Street Journal about a civil engineer who decided to lever his entire portfolio to initiate a concentrated position in Tesla.

Now, I’ve written about Tesla and its incredible run before, but the past year has put the stock’s previous run to shame.  Tesla returned over 700% in 2020, making it one of the most talked about and most profitable investments on the planet.

The civil engineer must be a genius!

Tesla makes great cars and people are really passionate about them. I drive one… they are amazing pieces of machinery.

Tesla also has a hard time making money selling those cars (fun fact: if you back out the environmental tax credits that they sell, they actually lose money on the cars).

And yet, Tesla is now worth more than Ford, GM, Fiat Chrysler, and Toyota… combined.

The bull case for the stock continues to be that Tesla is the ultimate clean energy investment and the company will sell a lot of cars and somehow start to make money on them which, in turn, will propel the stock to new heights. It’s hard to make the numbers work for that idea (they would really need to make a lot of money to justify the valuation) but people believe in the story and, therefore, the stock continues to climb higher (that whole “more buyers than sellers” thing).

Last year’s newly minted “Teslanaires” provide a great lesson (so far!) in the benefits of leverage. Things have only gone one way for them and that’s up.

During Tiger’s magnificent run, he was constantly able to extract himself from trouble on the course. There are highlight reels dedicated his incredible feats.

You could watch the shot from Montreal in 2000 to win the Canadian Open.

You could watch the shot from Augusta in 2005.

You could watch the hole in one from Phoenix in 1997.

Tiger was just flat out amazing.

Like “words can’t describe how dominant he was” amazing.

His swing required so much torque and was so violent that many offered there was no way his back would hold up. How could he swing that hard every day for an entire career and not injure himself? It just seemed like the most likely outcome that, at some point, his back would just give in and that would be it.

Others proposed that maybe the money would get to him…

He was, after all, the wealthiest athlete to ever play the game. Those that came before him actually needed the money and thus played much later into their careers than they otherwise would have preferred. The theory went that maybe Tiger would lose motivation once he was onto his third house and his second yacht. Even with his mental toughness, how could he stay focused given the lifestyle that golf afforded him? If it wasn’t going to be his body then it would surely be the money, right?

Well… it was neither his body, nor the money, nor the pressure that got him… it was an extramarital affair of all things.

Because it’s always the risk that you don’t see coming that gets you.

Tesla’s performance in 2020 was nothing short of astonishing. They beat every doomsday scenario that the shorts had to offer and then split the stock 5 for 1 towards the latter part of the year… and then doubled again for good measure. I’ve tried over the course of the last year to buy puts a few times… and gotten burned every time.

As I wrote back in January of last year:

"Things go up until people don’t think they can go up anymore…and then they really go up…only forcing worse decision making." 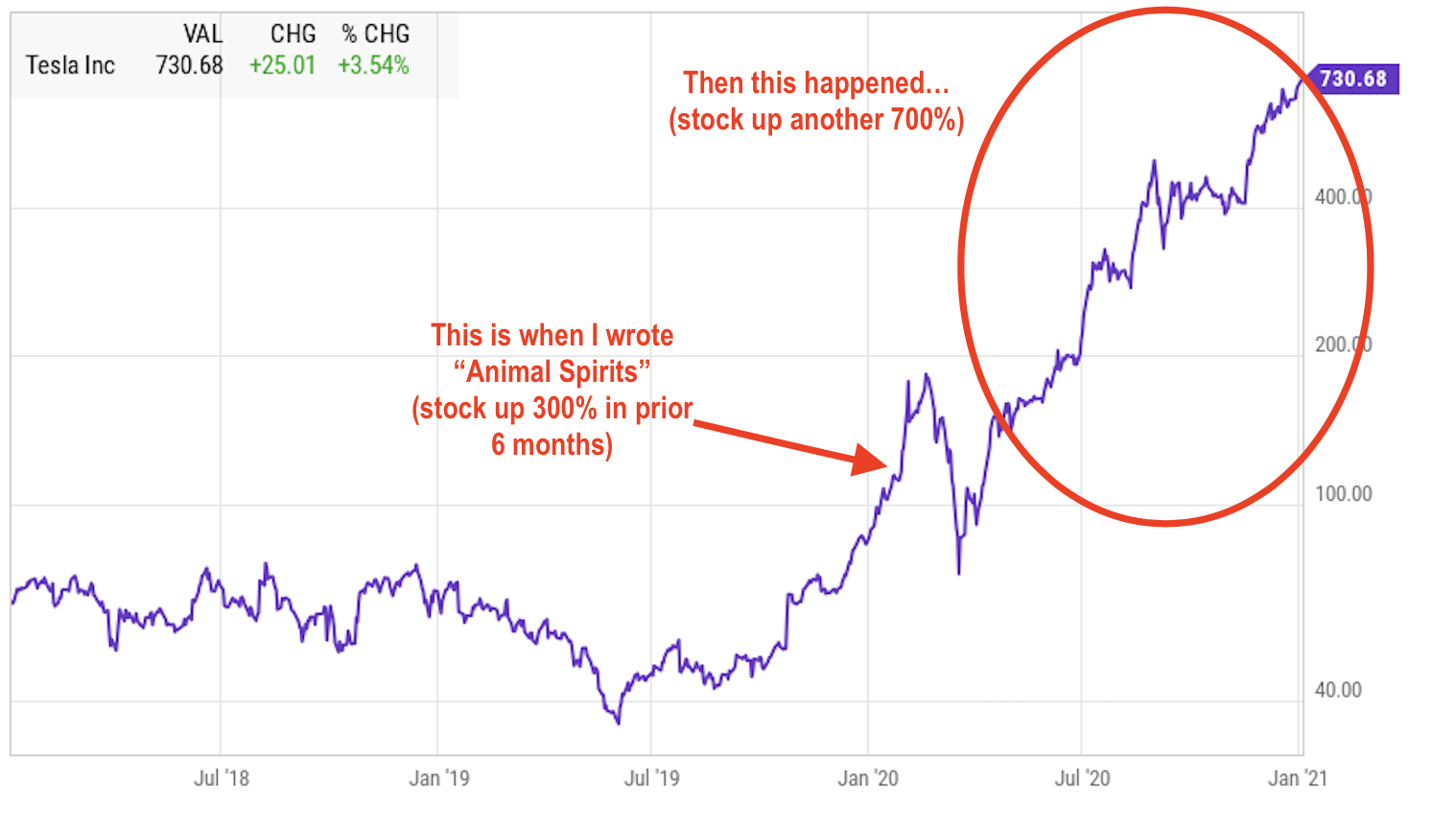 I guess I should have taken my own advice…

Anyway… will Tesla’s gravity-defying performance last? I don’t think so.

Why? I’m really not sure other than to say that things don’t only go up forever. There are usually some bumps along the way… much bigger than what the Teslanaires have experienced thus far.

Could Elon Musk’s bad behavior finally catch up with them? Maybe… but that’s already well known and even acknowledged by the SEC.

Could production delays slow it down? Possibly… but that’s already happened and it didn’t seem to matter.

Because it’s always the risk that you don’t see coming that gets you.