Abe Katz came to America in 1910 at age 18 with little more than the clothes on his back.  After travelling a week on a boat from Russia to Ellis Island, he showed up unannounced at his cousin’s doorstep in New York City, only to be turned away.  Already too many mouths to feed, they reasoned, why take in another?

Lost, broke, and lacking a basic understanding of the English language, Abe found his way to Brooklyn where he connected with an aunt and uncle that he heard lived there. Uncle Morris owned a candy shop and small novelty company where Abe could work and earn his keep. With all of a third grade education under his belt, Abe put his natural sales and marketing abilities to work, ultimately becoming CEO of The Ideal Novelty and Toy Company.

Over the years, Abe would continue to grow the company, eventually taking it public and becoming the country’s largest toy manufacturer (until a startup called Mattel came along to ruin his plans). Upon retirement, Abe moved to Florida where he and his wife Kate would live out their final years.

It was during those final years that Abe would have more time for friends and family to come visit. One such friend was Irving Stempel, a fellow magnate from the apparel industry. One day, Irving and Abe were on Abe’s balcony overlooking the golf course when Irving remarked that his company was making money hand over fist selling t-shirts. Never one to be outdone, Abe turned back to Irving and remarked (in his incredibly thick Russian accent),

He then shrugged and with an impish grin said…

For the life of him, Abe couldn’t understand why someone would buy a shirt with someone else’s name on it. But he knew Evil Knievel was popular in those days and, more importantly, he knew people bought them.

He didn't need an MBA from an Ivy League school or a study from his marketing department to be able to understand one very basic thing about consumer behavior:

Give the people what they want and they will buy it… lots of whatever ‘it’ is.

Abe Katz was my great-grandfather (“Pop Pop” to me) and serves as my inspiration for whenever something doesn’t make sense to me… to this day, I just shrug my shoulders and say “people buy ‘em.”Markets have been on fire of late.  Whether it’s margin balances increasing, the return of day trading, or the fact that the world is awash in liquidity, one thing you can’t deny is that certain parts of the markets are starting to get that frothier feel to them.  I wrote a piece about Tesla a couple of weeks ago that referenced this a bit.  People a lot smarter than me have also written about this phenomenon.

But another area that’s starting to get somewhat ridiculous is the insatiable demand that exists for SPACs.

SPAC is an acronym for “special purpose acquisition company”; a SPAC is actually a fairly simple (and fairly old!) concept. Here’s how it works:

A SPAC is nothing more than a form of financing. Like an IPO, it is a way to take a company public, albeit in a slightly different than normal way. A company raises money in a shell corporation (often called a “blank check” company) that then goes out and finds another company to acquire and take public.

In short, a SPAC is simply a pool of funds that is raised to finance an acquisition of an unknown company at a later date.

As an investor in the original SPAC financing, you are relying on the insights and experience of the sponsor (the entity that raised the funds to begin with) to find a suitable acquisition candidate. Historically, this has been a fairly staid business which has been used to find companies that are either too boring or too opaque to go public through the traditional IPO process.

But, like most things, 2020 proved to be the year when the SPAC market was turned on its head.

Everything from cannabis companies to electric car manufacturers to online gambling platforms were taken public this past year using the SPAC process. To be exact, a total of 248 SPACs went public in 2020, raising over $83 billion in proceeds in the process. To give you some perspective on how insane that is, the prior ten-year period (2010-2019) saw a total of 225 deals get done with proceeds of $47 billion.

Investors in these deals have done phenomenally well of late. According to data collected from SPACInsider, the average return for SPACs brought public in the first three quarters of 2020 that haven’t announced a deal yet is 12%. Like, people still don’t know what they’re buying and they’re bidding it up just because.

Those that have announced a deal? An even more absurd 87.2% average return.

Not a single SPAC deal that has come to market in the past year is trading at a discount to its issue price. Not one!

I guess the question I have is…

Like, what exactly is it about a SPAC that makes it more or less attractive than anything else? A SPAC in and of itself is neither a novel concept nor a guarantee of future riches. In fact, most of the companies that are coming public through this option today are doing so because they can’t or don’t want to go public through a traditional IPO process.

One possible reason for this is that companies don’t want to necessarily be held to projections they make about their success going forward. That’s one interesting wrinkle in the SPAC process: due to an arcane law passed by Congress 25 years ago which gives liability shields to public companies, startups going public through SPACs can make glowing projections about future results with less risk of facing lawsuits than they would if disclosing those figures in a traditional IPO.

Take an electric car company called Fisker, for example. They chose to go public through a SPAC in the third quarter of last year. At the time, they made projections that they would generate just north of $13 billion in annual revenue within the next five years.

The only problem? They haven’t generated a dime of revenue to date.

Here’s what investors had to say about it once the company went public: 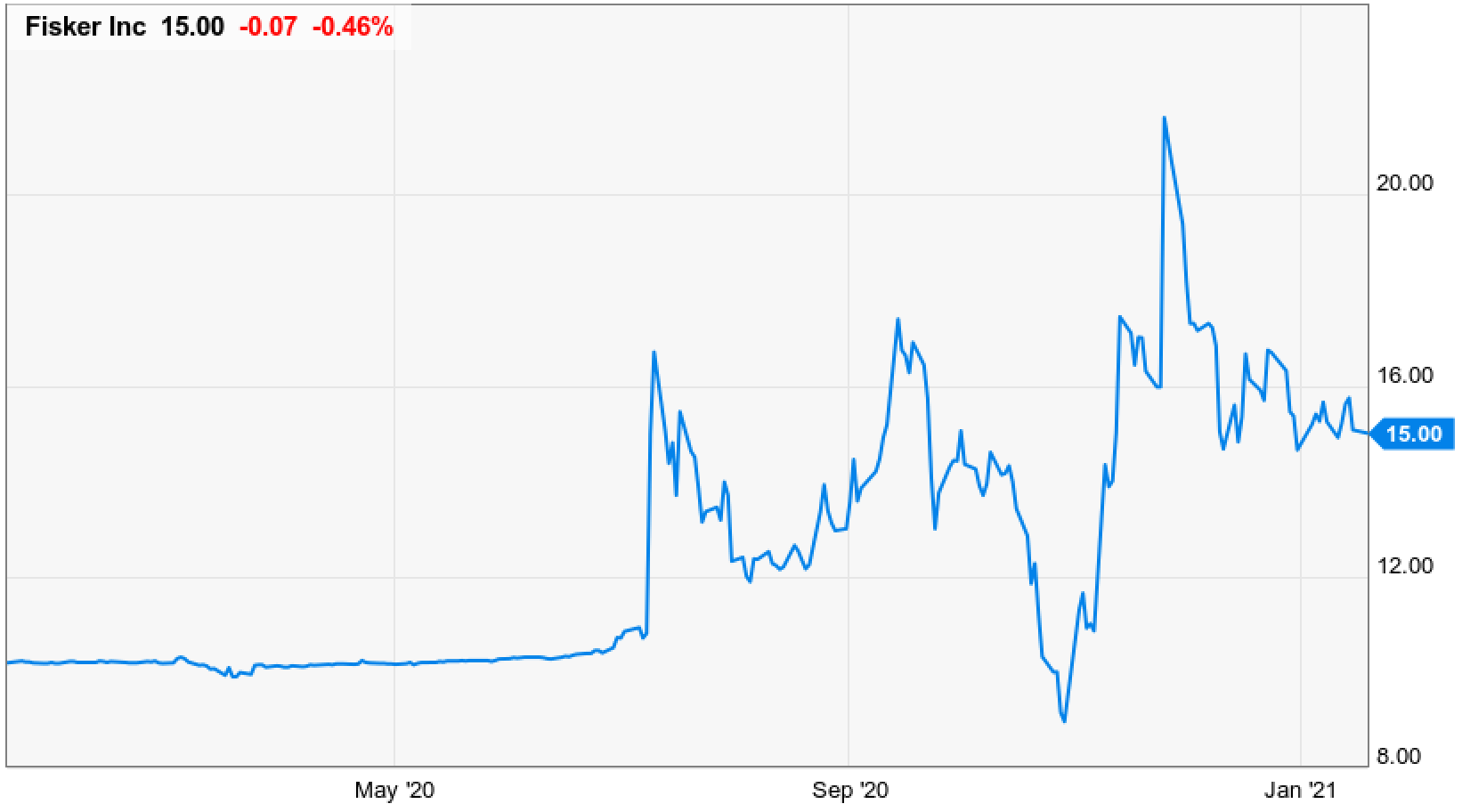 And they haven’t done a penny of revenue... yet.

Nor do they have a product... yet.

Somewhat related to the above, another potential explanation is that companies that are choosing this route are doing so because they’re too young in their lifecycle to go through what eventually would have been a traditional IPO process anyway but have an exciting business model that requires upfront investment now. With the boom in "story stocks" from companies engaged in SaaS, cannabis, and electrified everything business models, this is possibly a more wide-ranging and acceptable explanation for what’s happening. Maybe the future is just now.

But it still doesn't make sense... markets should be a little more scrupulous in their acceptance of these companies, right? Not everything should immediately be assigned a huge multiple right off the bat. That’s not happening though, which definitely makes me scratch my head a little bit. To reiterate, there’s nothing about a SPAC itself that makes a company that decides to go through that process necessarily special. So if the above explanations don’t hold then why SPACs and why now?  I’m really not sure but I guess either we’ve rediscovered a better mousetrap or public markets are so desperate for new stories that investors are willing to throw caution to the wind and buy anything that comes along promising something new, better, or different.  I think it’s the latter but there’s a really small chance that it could be the former (in which case I still don’t believe the valuations are justified but that’s a story for another post…).

So… what am I willing to say without any certainty?

This massive increase in SPAC issuance will subside rather soon.

But… what am I willing to say with some certainty?

Valuations on many of these companies that went public through a SPAC are utterly insane and won't hold.

Finally… what am I willing to say with total certainty?