Are we living through a simulation?

The simulation hypothesis states that all the current existence that humans know could in fact just be an artificial simulation.  With how weird life feels these days, there could be some validity to that argument.  While I don’t necessarily buy into it, I can tell you the markets have felt a bit like a simulation of late.

To wit, here are some weird things going on right now in this crazy market environment of ours… along with some advice on what you should do about them.

We are living through the perfect storm for corporate earnings growth

Rates are crazy low, corporate cash balances are crazy high (up over 50% since the start of the pandemic!!), and their small business competitors were badly bruised by the tumult of the past 18 months.  If there’s ever been a time for large company earnings to go crazy, it’s been the past year (and they have!).  Look back to the height of the pandemic and you will see warning signs flashing red on earnings… while it was bad for a quarter or two, the worst of what many feared never came to pass.  Things only got better…

Here's what we learned just yesterday:

Apple reported earnings of $21.74 billion… for the past quarter.

Microsoft earned $16.5 billion... for the past quarter.

It’s a new gilded age for large American companies and they’re making more money than ever before.

Temper that recent earnings growth optimism, however, by the idea that valuations have followed earnings higher as well.  Even with strong earnings growth, bargains are hard to come by.

The best analogy that I’ve heard for valuations is that they are like rubberbands.  They slowly stretch and stretch until they can’t stretch anymore and then they snap back quickly.  The inflating of valuations is the slow part, the deflating usually happens much more quickly.  We’re still in the slow part now but eventually they’ll snap back and things will normalize.

The hard part is knowing when.

For every prognosticator out there pitching doom and gloom scenarios right now, I would have you look at their track record.  A broken clock is right twice a day… most of these guys are lucky to be right twice in their careers.

This isn’t to say that everything is hunky dory... far from it.  Rather, most asset classes seem more fully valued in today’s environment.  Take the price to sales ratio on the S&P 500 for example... 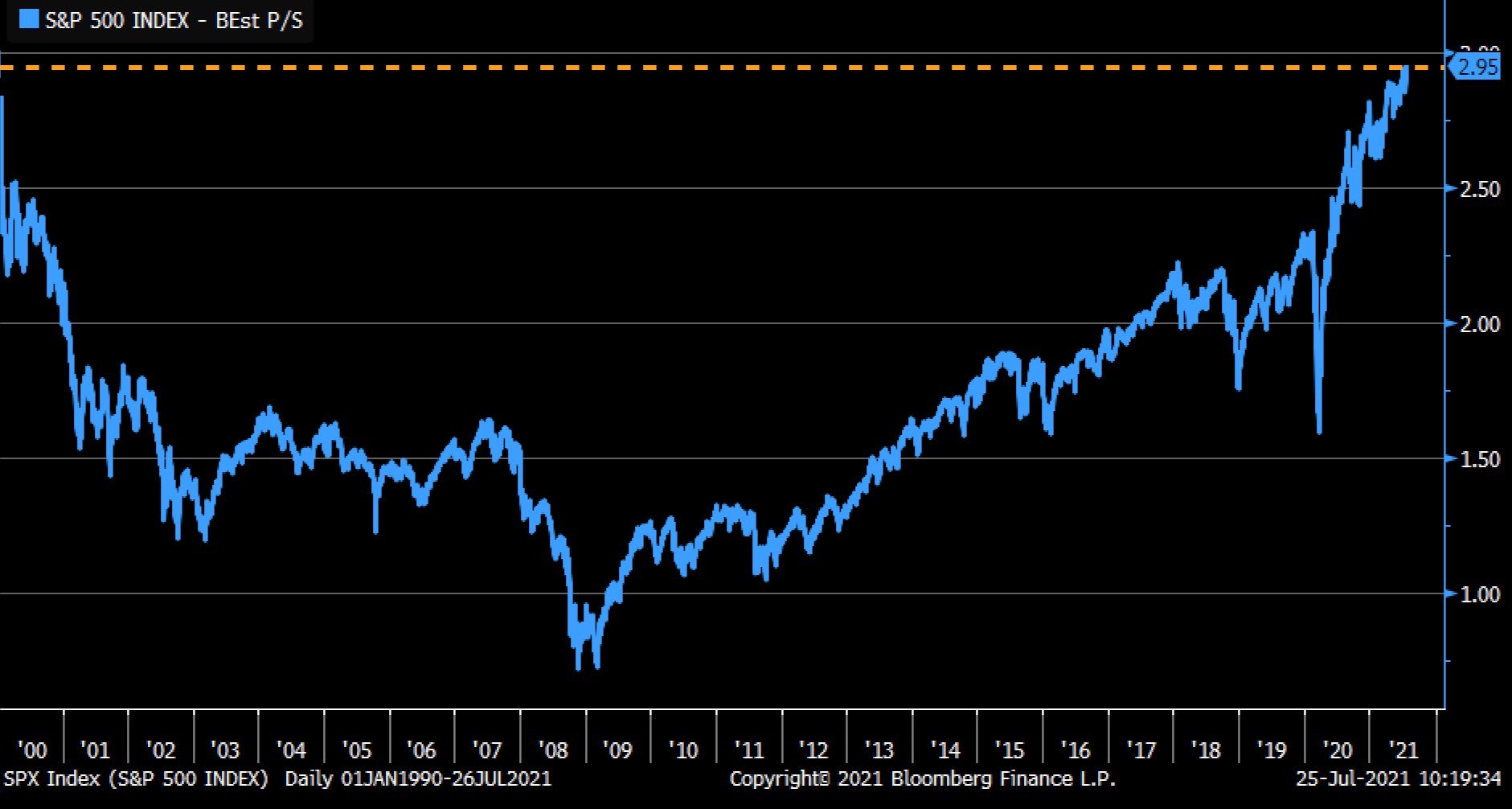 At 2.95x sales, we're at levels not seen since the heads days of the tech bubble.  Hence, there is no doubt in my mind that valuations will need to come down to Earth somewhat, but if the world keeps chugging along and revenue growth continues at the pace it's been on, equities may not end up being quite as fully valued as one might think.

Which leads me to my next point…

Sometimes the shorts win, most of the time they lose

I wrote about the insane valuations that SPACs were fetching back in January.  That one was actually pretty easy to spot.  At that time, there wasn’t a single SPAC looking for a deal that wasn’t trading at a premium… not one!  Now, there are very few that aren’t trading at a discount.

Life comes at you fast.

I thought that the popping of the SPAC bubble would have a greater impact on the broad market indices but I was wrong about that.  Ultimately, SPACs existed in a small corner of the markets which didn’t really have much of an impact on valuations of other sectors.

I wrote about how crazy Tesla’s valuation was back in January as well.  I was right about that too but totally wrong about what it meant for the broader markets (are you starting to sense a trend here??).  When I wrote Of Tigers and Teslas, Tesla traded for $735/share.  It closed yesterday around $645/share.  Hence, over the past nearly seven months, one of the largest stocks in the S&P 500 (and the one that propelled so much growth in 2020) is down over 12%.  Had you shown me only that information, I would have bet on a not so great market environment over that period of time and yet here we are, up nearly 17% year to date on the S&P 500.

Shorting individual stocks is really hard… shorting the market is even harder.

The housing market is screwed up

I could give you like 100 different data points to illustrate this but instead I’ll go with two:

71.4% of all home sales in California were done above their asking price last month.  Pre-Covid, that number was 29.5%.

The average time to sell a house in California is currently 8 days.  Pre-Covid, that number was 31 days.

It’s insane out there and bidding wars are the standard not the exception now.  But why?  Like corporate earnings, it’s a perfect storm of low interest rates, increased savings, and higher incomes.  No one would have thought this could have happened 18 months ago and yet here we are.

Many investors are about to be really disappointed

Natixis did a survey recently where they asked 750 investors of varying net worths and nationalities what returns they expected from their investments going forward.  They then sampled an equivalent number of financial professionals to track the differences.

That’s totally bananas but I think it indicates how out of whack things have become as money has been easy to make in markets post-Covid and volatility has been hard to come by.

More importantly, what it signals to me is that there are about to be a lot of very disappointed people out there.

So what’s an investor to do with these crazy markets?

It’s not often that I quote Napoleon but I will do it here; when asked his definition of a military genius, his answer was:

“The man who can do the average thing when everyone else around him is losing his mind.”

Here’s the thing you need to remember…

Investors are ALWAYS losing their minds in one direction or the other.

Don’t believe me?  Consider the following: 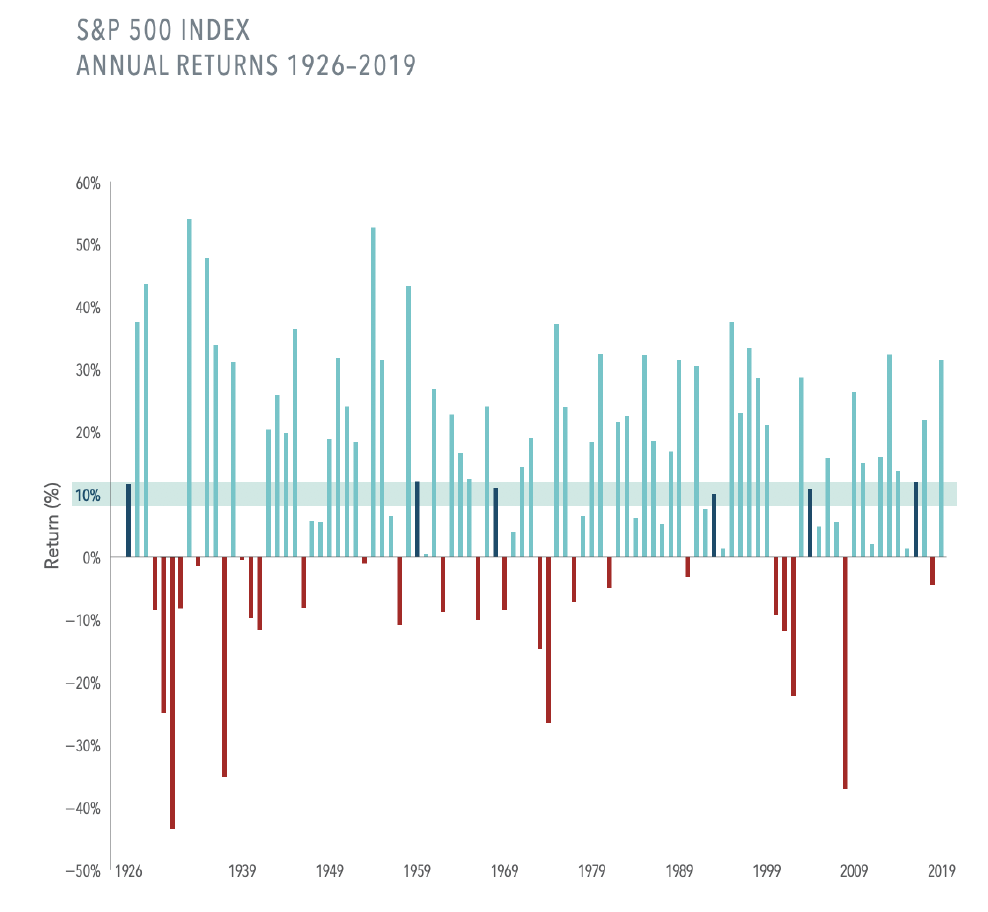 Said differently, in 89 of the 95 years, the market didn’t even come close to its average long term return.  In any given year, annual returns have been as high as +54% and as low as -43%.  All along the way, the average investor continually lost her mind in both directions.  But, at the end of the day, the market still hit its average return.

So stick with the good, timeless advice that you know works even while the world continues to look and feel a little crazier than normal…

And allow yourself to do these average things while everyone else around you loses his mind.