Jimmy McMillan is a Vietnam vet, social commentator, and perennial political candidate.  He’s also pretty crazy (with an even crazier beard!) and I enjoy writing about crazy people… so here we are.

See if you can pick out Jimmy in the lineup of Gubernatorial candidates from a few years back: 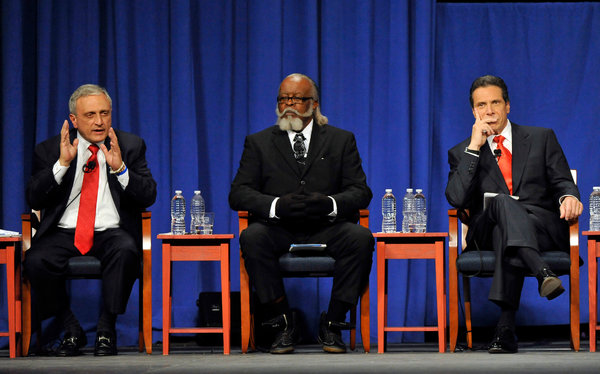 Anyway, McMillan has never actually held elected office but has certainly generated a lot of political interest over the years, mainly through stunts like dousing himself in gasoline or climbing the Brooklyn Bridge and refusing to come down until TV cameras allowed him to air his grievances. He has run for mayor of New York City and governor of New York but has never quite gotten the momentum to get into Gracie Mansion or the hallowed halls of Albany.

But beyond all of that, Jimmy McMillan is mostly just known for his saying “The Rent is Too Damn High!”.  He even created an entire political party based around it. To be sure, he is talking about rents in New York City which, even to the most casual observer, are incredibly costly.

He’s been panned on SNL, lambasted in the press, and made fun of by more serious politicians. But Jimmy McMillan took time to expose a wide-ranging problem with the way the system works and that’s a large part of the battle towards changing the game…

If you’ve been reading this blog for a while, then you know that I’ve written about conflicts in the financial advice business before.  What I haven’t written about (at least not as explicitly as I probably should have) is the cost of accessing that oftentimes conflicted advice. Investors the world over-pay all kinds of different fees to access advice.

They pay commissions and markups…

Looking for a free lunch?  You likely won’t find it with your advisor.

Many of these fees are opaque. Many of them are unnecessary.  Think about these fees as a form of portfolio rent – you pay them in order to keep your portfolio together but, like rent, they’re due each month irrespective of the quality of the advice you receive.

Well, I’m here to tell you something…


The Portfolio Rent Is Too Damn High!


The business of financial advice has changed a lot over the years and gone through what I would characterize as three separate phases:

Stockbrokers and research geeks thrived during The Information Age. Because of the asymmetry that existed around access to information, clients relied on their brokers to give them recommendations on companies that they had no way of knowing anything about other than what they were being pitched by their research departments. In exchange for access to this information, clients had to pay absurdly high commissions.

The Information Phase started to crumble fairly quickly once low-cost competitors like Schwab got started and commission rates became deregulated… the scandals of the late 1980’s didn’t help things either. I've referenced this before but it’s worth remembering that the transactional business has been shrinking for the past couple of decades.

The important thing to understand about The Information Phase, however, is that it was inherently based on the idea that the general public couldn’t have access to the same information that Wall Street did. Once more modern forms of information dissemination began to proliferate and securities laws were modernized to allow for better and fairer information sharing with the public, The Information Phase had no choice but to end.

Brokers who were used to selling information had to find a new way to make money, which ushered in…

The first modern-day mutual fund was launched in 1924 with the creation of Massachusetts Investors Trust but the business didn’t really take off until the bull market of the 1980’s. The idea of the star mutual fund manager (Peter Lynch, etc.) took hold and an entire industry built around product engineering exploded.

The brokers of The Information Phase magically transformed themselves into mutual fund salespeople and the opaque world of mutual fund 12b-1 fees grew almost exponentially. 12b-1 fees are the “servicing charges” that mutual fund companies pay to brokers to keep clients in their funds. They can range anywhere from 0.25% to 0.75% of the value of a client’s holdings annually.

Pretty soon, brokers were able to make more money pitching mutual funds than they were pitching information to unknowing clients. Add to it the fact that the aforementioned 12b-1 fees allowed brokers to receive compensation without their clients ever seeing it paid to them (since it is allowed to be taken directly out of the net asset value of the fund) and you had a pretty perfect storm that grew the mutual fund industry over 20x during The Product Phase.

The Product Phase started its descent once low-cost brokers like ETrade disrupted the marketplace and began allowing consumers to buy no load (read: commission free) mutual funds on their own. Pretty soon, the brokers of the Product Phase were disintermediated and they needed to find another way to make a living for themselves. Enter…

The Advice Phase is where we’ve been for about the past twenty years or so (depending on how you define it…).  In this phase, the value of their advice – financial planning, asset allocation, etc. – is what advisors are charging for.  This phase is likely the most enlightened and reasonable for the client… and also provides the most dependable revenue stream for the advisor.  Gone are the days of having to worry about which fund company pays best and here are the days of setting your own rate (which is where the problem lies… more on that in a moment…)

Throughout this phase, the “AUM model” has proliferated. In this model, advisors charge their clients based on the value of their assets (full disclosure: this is how I typically charge for advice… albeit with a twist). Typically, clients pay their advisors anywhere between 0.75% and 1.50% of their assets to access this advice. This model has been remarkably resilient even in the face of some pretty serious industry upheaval. It’s survived the Tech boom and bust, the Great Recession, and the rise of robo-advice.

To be fair here, this form of advice is the most personalized and, as such, the most difficult to commoditize. Computers might be able to pick stocks but they have a tough time advising you on how to plan after the death of a spouse or an unexpected fall in the markets.  In short, the human touch matters and most advisors are compensated pretty handsomely as a result.  But just how handsome should that compensation be?


Well, I believe a new day is coming. If you think back over the first two phases, it isn’t that the businesses in question failed to exist; to the contrary, the mutual fund industry is as large as its ever been and Schwab continues to dominate in the transactional space.  The businesses changed, however.  Index funds took market share from active mutual funds and commission rates on transactional business continued to grind lower.  As a result, mutual fund companies don’t charge nearly the fees that they once did (fees have come down, on average, 30% in equity mutual funds over the course of the past ten years) and Schwab doesn’t even charge commissions for stock trades anymore (they are primarily a bank now and make money on the cash spread).

So the businesses that survived got smart and evolved.

But they mostly recognized that less can be more.  That’s where I think we’re going on advisory fees, too.

When I started this business last year, it was with the clear-eyed belief that most clients were paying way too much to access advice. Cut to 17 months later and I’m more convinced than ever. We don’t have a client paying more than 0.40% annually to access advice.

Here’s how our fees stack up against our competition: 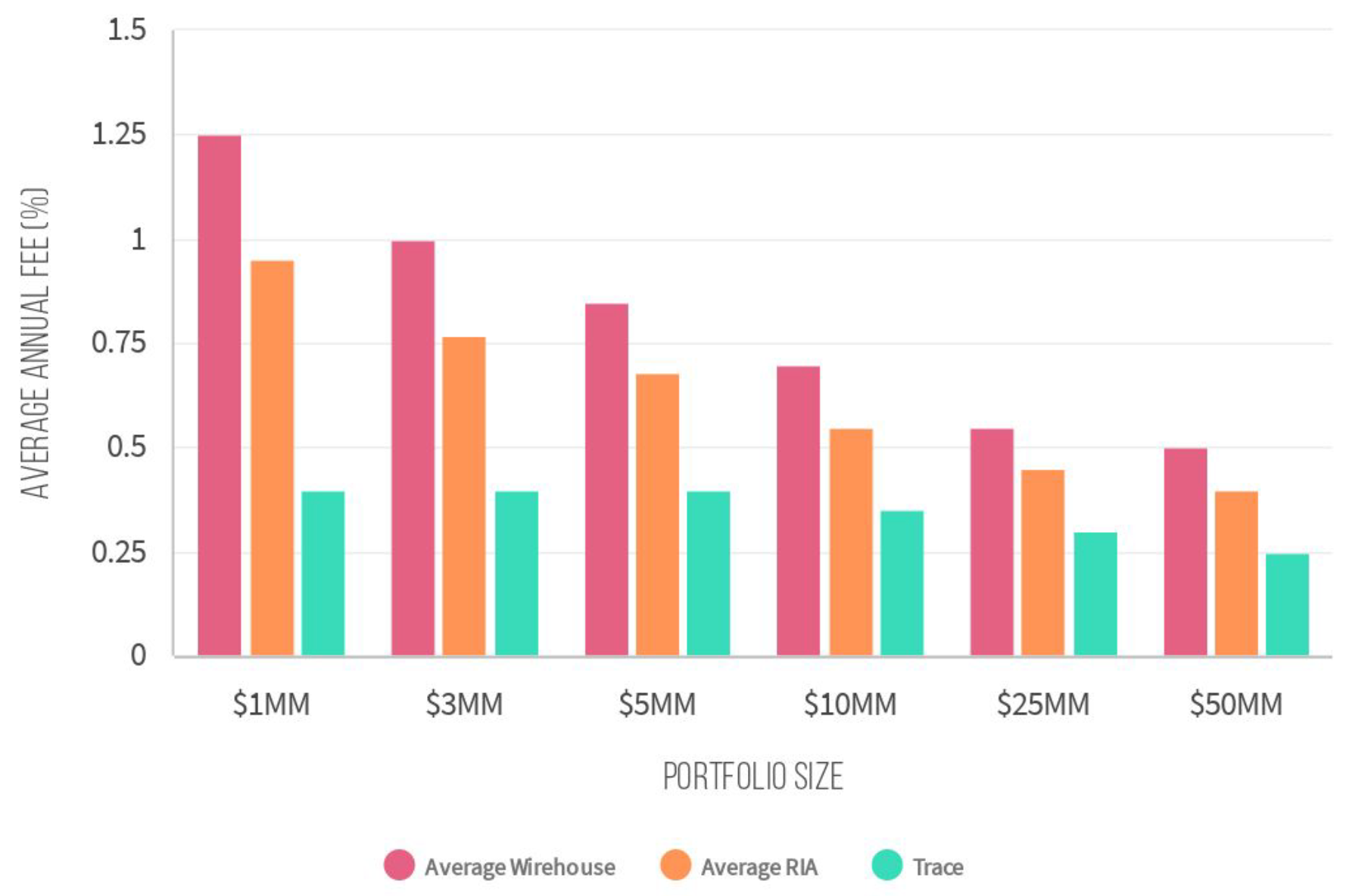 
But what do you give up in exchange for this lower cost of advice?

It’s not expertise. I have a CFA, a MBA, and a deep working knowledge of markets.

It’s not experience. I’ve been doing this for over 15 years and have lived to tell about the two worst market panics of our generation.

It’s not objectivity.  100% independent without an axe to grind or a product to sell.

What you actually give up are some of the things that legacy firms made you think were important – bloated staffs, big offices, and fancy events.  No doubt some people are drawn to those things and, if they are, then Trace Wealth Advisors probably isn't the right fit for them.

(quick side note: those things will continue to matter less because of Covid… I don’t think you’ll be invited to a cocktail party at a fancy office tower anytime soon.)


So, if expert advice at a reasonable cost served alongside some of the best technology in the industry interests you then follow the advice of Jimmy McMillan and be a part of the change that is already underway.

Say it with me…


“The Portfolio Rent Is Too Damn High!”


Oh, and then e-mail me here to set up a time to discuss how we’re driving to better outcomes at a far lower cost!!!