“The investor who says, ‘This time is different,’ when in fact it’s virtually a repeat of an earlier situation, has uttered among the four most costly words in the annals of investing.”


In case you haven’t been paying attention, large cap tech companies have become the market over the past few years. Don’t believe me? Check out this chart… 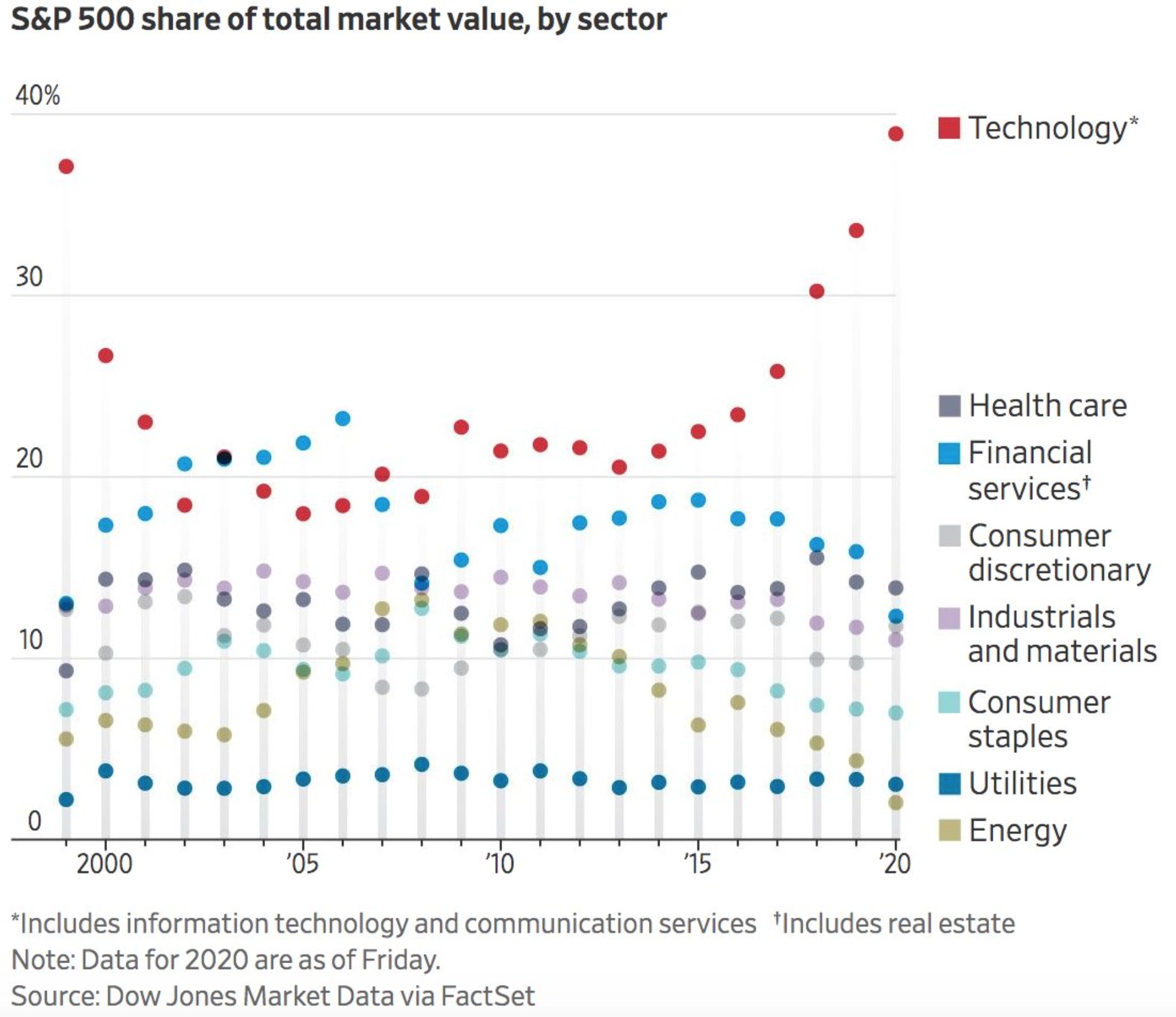 Yup, they’re fast approaching becoming half of the S&P 500 and there doesn’t seem to be a whole lot stopping them. The rocket ship ride started in 2013, when tech represented a measly 20% of the index. That share has doubled in the past seven years, which seems kind of insane. The valuations are almost laughable on some of these companies at this point. Tweets like this from super smart people aren’t even blinked at anymore: 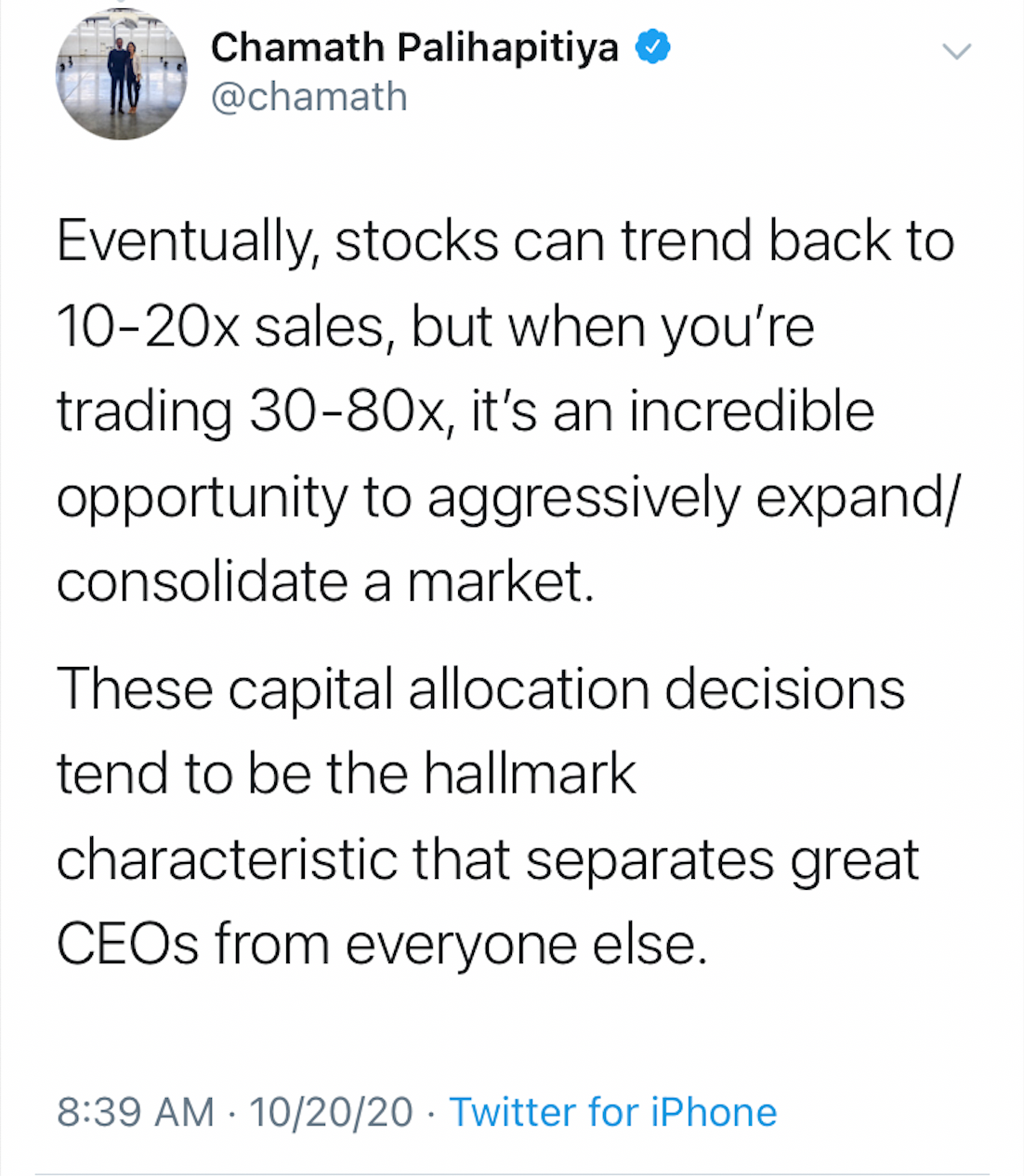 Chamath is implying that 10-20x sales (not earnings…sales!!) is a reasonable average valuation. To put this in perspective, the S&P 500 has traded at an average of around 1.6x sales for the last 20 years (it's currently trading at 2.5x... the highest ratio on record).

It’s a little hard to believe that any of these fast growing companies deserve to be valued at 20x sales, let alone 30-80x sales… but he might be right.

Here’s the thing, I’ve railed on and on about the crazy valuations that these big tech names fetch for a few years now, only to watch the valuations become even crazier. It’s never made much sense to me until I sat down to write this post on an Apple computer…

While my kids watched Netflix downstairs…

And my wife rode her Peloton…

And Amazon packages stacked up outside the front door…

Blocking my path to the Tesla sitting in the driveway.

You’re probably getting sick of hearing about my kids. I’ve written about them here, here, and here. But they are like walking investment analogies and I like them a lot and so I write about them constantly. This post is no exception. Bear with me on this one, I think it makes sense…

My son Everett just turned 3. Overnight, he’s turned into somewhat of a maniac (note: you can only be beaten up by your brothers so many times before you start to fight back) and he loves his “treats”. He eats cake, lollipops, cookies, and ice cream like they’re going out of style… it’s almost like he believes that every dessert is his last meal. 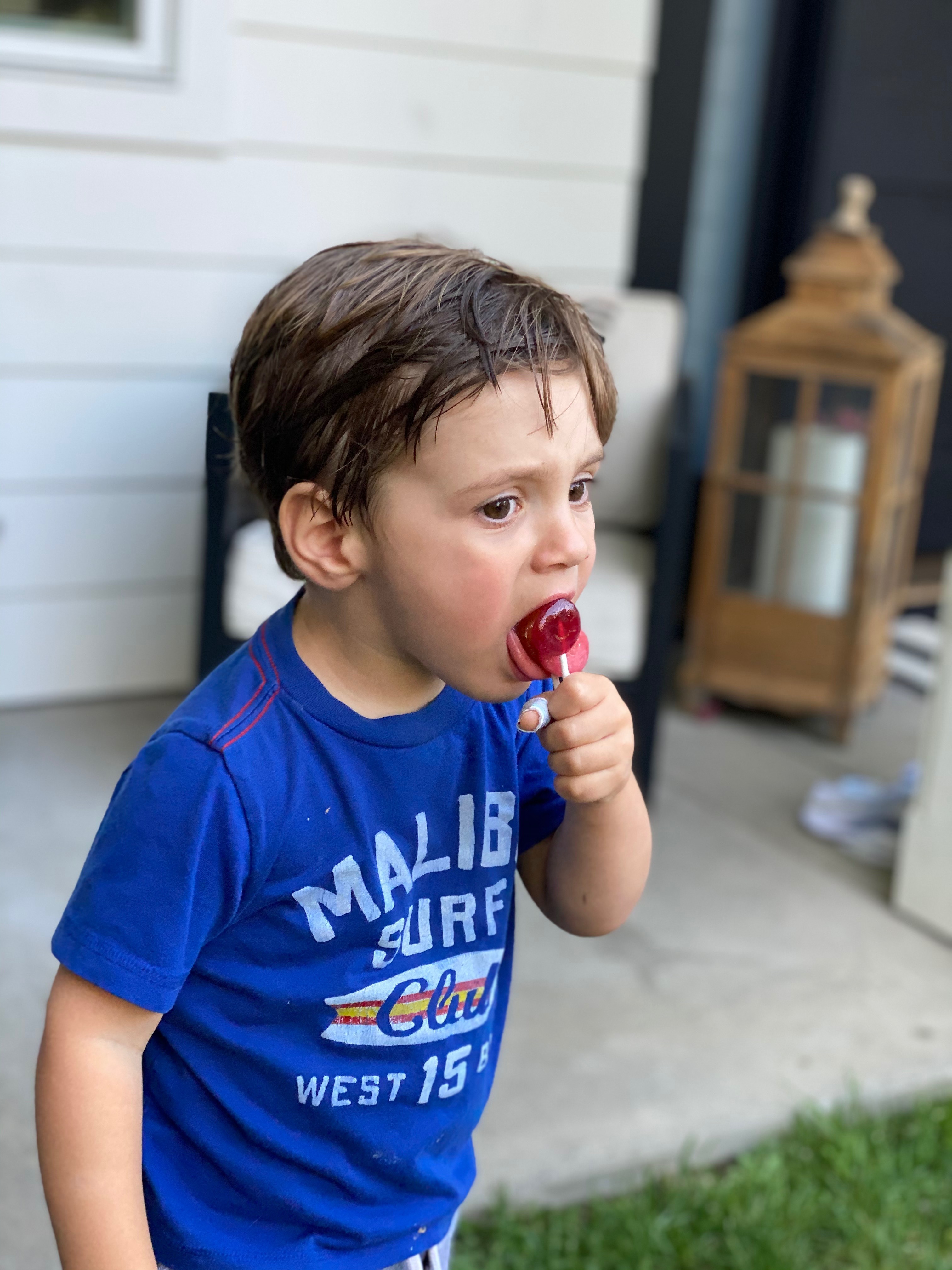 He asks for treats in the morning, he asks for them with lunch, and he can’t really go to bed without at least tasting something sweet. The rule in our house is that he’s only allowed one treat per day but that rule (like pretty much every other rule) has only been loosely enforced of late DUE TO THE FACT THAT WE ARE IN A GLOBAL PANDEMIC AND WE HAVE NO CONTROL.

Sorry, where was I? Ah yes… the treats. So Everett will usually eat one cookie of some kind every day. Last week, he asked for an Oreo at lunch and, like the good parents we were pretending to be, we reminded him that that would be it for the day. Our restriction lasted roughly four hours until he asked for another and I acquiesced. Shortly after dinner, I had to make a phone call upstairs and Jenny was cleaning up downstairs. Seeing an opportunity developing with two distracted parents, Everett disappeared for a little while only to reappear with a half empty bag of Oreos. Based on our initial findings, it would seem that he ate somewhere between six and eight cookies… but our investigation is ongoing at this time.

Now, Everett weighs somewhere around 35 pounds soaking wet and his eyes were a little bigger than his tiny little stomach in this one instance. For about the first 20 minutes or so he giggled around the house, celebrating his unexpected victory over the dessert gestapo.

Then, a few minutes later he started to quiet down and hold his stomach.

Within an hour, he was complaining that it hurt.

Shortly before bed, he swore off Oreos for good and said he was never having one again. It’s been one week and he’s still afraid to imbibe.

But Everett learned the lesson that all investors must learn eventually:

Too much of a good thing always ends badly. 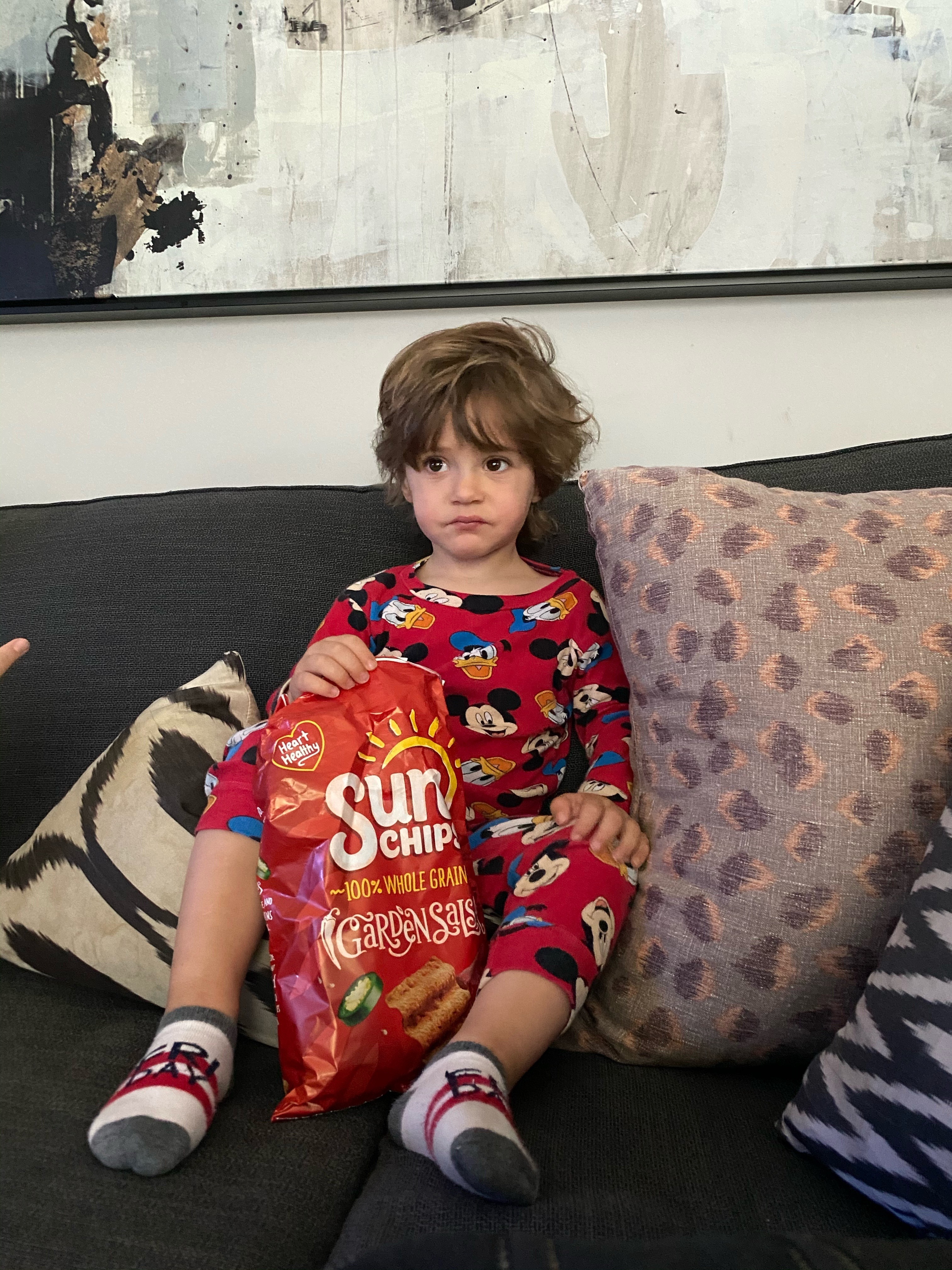 The greater fool theory states that it is possible to make money by buying securities, whether or not they are overvalued, by selling them for a profit at a later date. This is because there will always be someone (i.e. a greater fool) who is willing to pay a higher price.  Many of the individual companies that I’ve talked about over the years rely heavily on this premise since so much of their growth is on the come and thus the only way to make money is for valuation multiples to expand.

But, given the idea that there will always be someone willing to pay more, these excessive valuations shouldn’t concern you much… unless of course that greater fool ceases to exist one day. Here’s what that looked like about 20 years ago when the greater fools decided to go into sudden hibernation:

Now look, I’m not suggesting that what’s happening with these companies today is analogous to 2000. It’s actually not.

That’s because his time is different… actually, it’s always different.

It’s always different because your own circumstances are constantly changing over time.  At a minimum, you can say your circumstances have changed since the last tech boom of the late 1990’s because you’re a little more than 20 years older than you were back then and therefore (all else equal of course) have a shorter time horizon with which to invest.

It’s always different because the reasons for the market’s movements can be explained away differently. What was optimism around what the internet could become in the late 1990’s has morphed into optimism around the effect of low interest rates and the benefits to online platforms from the death of brick and mortar retail.

It’s always different because the access to information and the way in which we consume it is ever-changing.  What newspapers and telegraphs did for us in days gone by are the same things that social media platforms do for us today.


But with all of that said, I have no doubt that the end result of all of this craziness will be the same that it always is… valuations will stretch to the outer bands of crazy and then they will revert back to their long-term averages. The hard part about investing though is knowing where that outer band exists and what actually constitutes crazy… mainly because crazy only really exists in hindsight.

So whether you’re sucking down Oreos by the fistful or binging on all the tech stocks money can buy, these good times will probably even out at some point… and maybe even turn bad.

I guess what I’m saying is that this time isn’t different.